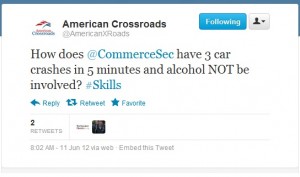 As we reported earlier, Commerce Secretary John Bryson was hospitalized after a series of car crashes in Los Angeles on Saturday, but thankfully was released without serious injury to himself, or anyone else. If you’re a staffer for the Karl Rove-run American Crossroads SuprPAC, however, the real blessing was a chance to attack Bryson. The group sent a tweet Monday morning cracking wise about alcohol being involved (Bryson actually suffered a seizure), then deleted it with a weak apology.

The tweet, captured by Josh Dorner, an intrepid staffer at ThinkProgress, read “How does @CommerceSec have 3 car crashes in 5 minutes and alcohol NOT be involved? #Skills.”

Even “funnier” than that tweet, though, was American Crossroads’ “apology,” via TPM:

American Crossroads spokesperson Jonathan Collegio apologized for the suggestion that Bryson was driving drunk. A Commerce spokesperson said Monday Bryson suffered a seizure before he crashed his vechicle into two others Saturday.

“The hashtag (about his driving #skills) attempted levity, but it communicated poorly. We took it down,” Collegio said. “I regret the tweet.”

So, they’re not sorry they made the joke, just that they didn’t make the joke effectively enough, with the properly-attenuated hashtag. Perhaps the hipper spelling “#Skillz” would have properly conveyed the levity? It appears that Collegio overestimates the magical powers of hashtagging, which doesn’t automatically make horrible things funny. You can’t just tweet “Hey, at least Jeffrey Dahmer used the right fork,” and make it funny by adding “#Mannerz!”

It’s not as though Crossroads will pay any sort of price for this, though, so the quality of their tweets, or their apology, means little. Funded by billionaires, Crossroads is one of a handful of Republican SupperPACs that have pledged to spend upwards of $500 million to get Mitt Romney elected this year, so they don’t really have to care what anyone else thinks.

Bryson was nominated to succeed previous Commerce Secretary Gary Locke, who resigned to become US Ambassador to China. Bryson’s nomination was held up for several months by Sen. James Inhofe (R-OK), until he was confirmed on October 20, 2011.