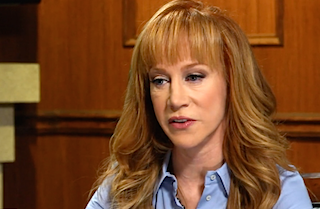 In a pair of interviews last week — one with the Associated Press, the other with Marc Maron — comedian Kathy Griffin suggested that someone at CBS had told her that the network was “not considering females” for the late night slot left vacant by Craig Ferguson and ultimately filled by British actor James Corden.

In a statement to Mediaite, CBS vehemently denied that claim, saying, “CBS never said that to Kathy Griffin; never met with her, and in fact, we did meet with several female candidates.”

Now, in a new interview with Larry King, Griffin has walked back her original claims, to a degree, while still expressing frustration over the lack on women on the late night stage.

While Griffin told King that she thinks Stephen Colbert, who is taking over for David Letterman on CBS’ Late Show, is “brilliant,” she added, “I’m not happy that another middle-aged white guy got the job, but he is obviously a very, very funny guy.”

Asked what she thinks of Corden, Griffin said, “I don’t know who he is. I wanted a woman to get that slot.” She once again said that CBS told her they “weren’t considering females” for the position, but when pressed by King on whether someone at CBS said that to her directly, she hedged.

“I heard from someone that they said that they’re not considering females,” Griffin clarified.

With Chelsea Handler leaving her show on E! earlier this year for a streaming series on Netflix, there are now a grand total of zero female late night hosts on television.