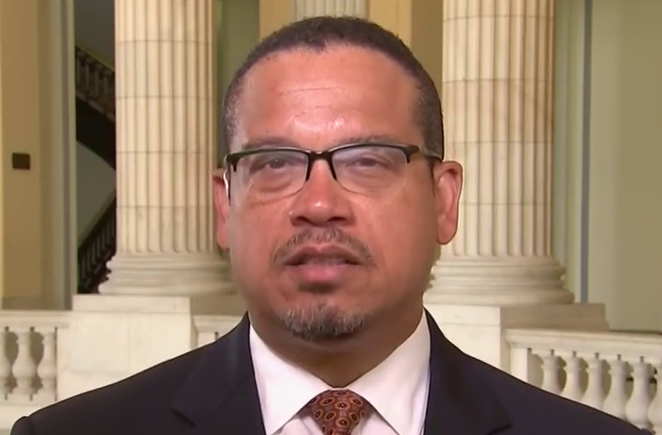 Congressman Keith Ellison (D-MN) is getting a lot a flack for a tweet he posted on Wednesday.

Ellison, a prominent Democrat on Capitol Hill who also serves as the deputy chairman of the Democratic National Committee, attempted to troll President Trump with the following selfie:

At @MoonPalaceBooks and I just found the book that strike fear in the heart of @realDonaldTrump pic.twitter.com/r81nYoeqpL

Antifa made a ton of headlines in 2017 for their incitements of violence that were initially viewed by many on the left as anti-Trump protests. The group has also been classified by the Department of Homeland Security as a “domestic terrorist organization.”

Ellison was criticized for “endorsing” Antifa.

A terrorist manual should concern the president. Especially in the hands of a member of Congress.

.@keithellison you do know that ANTIFA is labeled as a domestic terrorist organization by Homeland Security, right? https://t.co/Q7QvCINtr6

This is pretty dumb. Sigh.

DNC co-chair and sitting congressman, Keith Ellison, known for his far-left ideology and anti-Israel views, promotes a book about #Antifa a far-left radical group that has a well-documented history of violence against political opponents. https://t.co/Z56N4kxOu8

I would call Keith Ellison out for endorsing the fascist Antifa group, but the congressman doesn’t like me very much… pic.twitter.com/Teikt50GGu

In light of this photo from a Democrat member of Congress, a reminder: the Department of Homeland Security alerted state and local officials about Antifa in 2016, labeling the group as ‘domestic terrorist violence’ pic.twitter.com/mI2ksaJeZO

The FBI and DHS consider Antifa a domestic terrorist organization. Keith is a DNC official AND member of Congress. Does the @DNC now support terrorist groups? Every Democrat in Congress should have to answer for this ON the record. https://t.co/Xi49ZP1aGu

I mean, I guess Antifa is a step below palling around with dudes who fund suicide bombers https://t.co/7PgAX6du9N