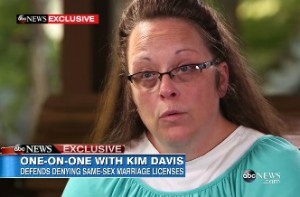 Kim Davis, the Kentucky clerk who was sprung into the headlines for refusing to issue marriage licenses to same-sex couples, says she is now a Republican.

Davis, an elected Democratic clerk in Rowan County, cited her religious beliefs in defying the Supreme Court’s ruling in Obergefell v. Hodges in June, which legalized same-sex marriage nationwide. She no longer believes that the Democratic Party embodies her views.

“My husband and I had talked about it for quite a while and we came to the conclusion that the Democratic Party left us a long time ago, so why were we hanging on?” Davis told Reuters on Friday.

Davis was found to be in contempt of court for refusing to issue marriage licenses to any couple — gay or straight — and spent five days in jail earlier this month. The day after she was put behind bars, one of her deputy clerks issued the first marriage license to a gay couple in Rowan County. Deputy Clerk Brian Mason pledged to defy Davis if he was ordered again to withhold marriage licenses.

Davis has received support from GOP presidential candidates including Mike Huckabee and Rick Santorum, but was rebuked by White House Press Secretary Josh Earnest and others for defying the high court’s ruling.

Marriage licenses currently being issued in Rowan County do not have Davis’ name or her position on them. The county name is also omitted. Davis told Reuters that she is willing to return to jail if U.S. District Judge David Bunning objects to those practices. It’s a familiar position for Davis, whose attorney said while she was behind bars the first time that Davis was prepared to stay there as long as possible in order to defend her beliefs and religious conscience.

Davis has done a number of interviews this past week, during which she became emotional when talking about personal attacks being directed toward her, and said she would not issue marriage licenses to any of her children if they were gay.