Kirsten Powers Rips Obama: ‘Not Presidential’ To ‘Smear’ Fox News Just Because You Don’t Like Hannity

Kirsten Powers Rips Obama: ‘Not Presidential’ To ‘Smear’ Fox News Just Because You Don’t Like Hannity 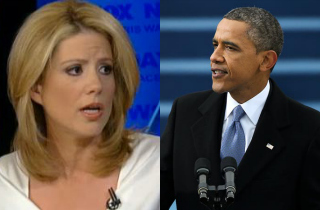 After President Obama told The New Republic that Fox News and Rush Limbaugh are partially responsible for the partisan gridlock in Washington, Fox liberal contributor Kirsten Powers took to the FoxNews.com opinion page to blast Obama as un-presidential for “smearing” a news network just because of his political disagreements with its opinion commentators.

“President Obama was back to his grousing about the one television news outlet in America that won’t fall in line and treat him as emperor,” Powers wrote of Obama’s recent remarks.

“[T]he president loves to whine about the media meanies at Fox News,” she mocked. “To him, these are not people trying to do their jobs. No, they are out to get him. What other motive could a journalist have in holding a president accountable? Why oh why do Ed Henry and Chris Wallace insist on asking hard questions? Make them stop!”

Obama’s Fox criticism, Powers suggested, is part of “a long line of comments from his White House as part of their campaign to silence any dissent they detect in the press corps.” She cited the White House’s ignoring of Fox News Sunday during its Sunday morning talk show rounds, and its avoidance of Fox News reporters’ questions on the Benghazi attacks.

Regardless of your political beliefs, Powers continued, “everyone should be concerned when leaders of our government believe they can intentionally try to delegitimize a news organization they don’t like.” After describing her political views as “liberal,” Powers lamented that more of her left-leaning media colleagues have yet to call the president out for trying to squelch political dissent.

The Daily Beast columnist was then careful to delineate Fox’s opinion programming from its hard news, noting that she understands how some of Fox’s commentators “would get under President Obama’s skin” in the same way MSNBC’s commentary programming is “not the favorite stop for Republicans.”

“But,” she wrote, “it’s not okay — or presidential — to continue smearing an entire network of hard working journalists because you are mad at Sean Hannity.”