Late to the Game: AOL Tweets That Biden Might Be Running for President

Late to the Game: AOL Tweets That Biden Might Be Running for President 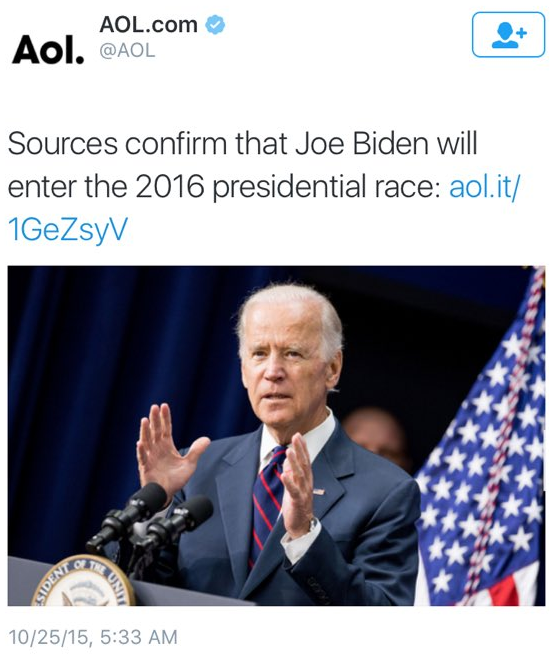 Take particular note of the fact this was posted this morning. And, well, unless you’ve been living under a rock you know Biden’s out.

Also, to answer your question, yes, AOL is still a thing, and yes, they do news coverage.

And thanks to that tweet (now deleted), everyone’s gotten a great reminder of that fact:

When you forgot to remove some of your scheduled tweets in lieu of the news cycle. https://t.co/CJl0Uy54BK

AOL been up all night snorting ground up AOL disks https://t.co/BJZJS5XZ9b

Dial up breaking news FTW. This posted 3 hours ago. https://t.co/rhmEpFP6AQ

You sure about that, AOL? https://t.co/l5jXGOYjD6

this seems a bit off. https://t.co/sXQjY0hxNv

Can't believe all the major outlets missed this. What a scoop! https://t.co/MfOTINiMnp

::schedules twete on a Friday night, cracks open a Heineken::

And it took them a few hours to take the tweet down so, again, perfect set-up for a dial-up joke.