Latest Way Obama Will Ruin America: Giving Back Manhattan To The Indians!? 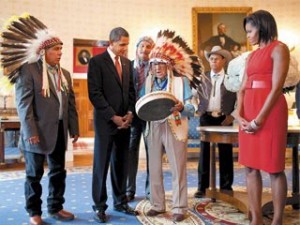 With so many rumors of how President Obama will eventually send this country hurtling into the fiery abyss of Socialist Gay Muslim Hell, you have to forgive us if we missed one. However we don’t want any of our readers to feel left out during any New Year’s Eve “How is Obama going to kill America now?” party games, so we’re circling back to bring you this doozy from earlier in the week: Did you know Obama is going to give away Manhattan to the Indians?! He totally is!

It all started when Obama announced that the United States would support the UN’s Declaration on the Rights of Indigenous People which was adopted in 2007 but opposed by President Bush. The trouble started when people read the Declaration and noticed some suspicious wording in Article 26:

“Indigenous peoples have the right to the lands, territories and resources which they have traditionally owned, occupied or otherwise used or acquired.”

Soon, Bryan Fischer of the American Family Association was worried this meant Native Americans were gonna start snatching up parts of America and WorldNetDaily’s Eugene J. Koprowski extrapolated that to mean that Manhattan was up for grabs.

But why would Obama give up Manhattan? That’s the only part of New York that’s been snow plowed! Well, Koprowski knows the dangerous truth:

“Obama’s interest is personal. He noted during the 2008 presidential campaign he was officially adopted by the Crow Nation, an Indian tribe in Montana, and he was given an Indian name.”

The guy’s a Secret Indian too?! Man, people always say Obama is too aloof and elitist to be a man of the people but it seems like he’s secretly a member of every religious group, political party, and Boy Scout troop in the country! Impressive.

Last night on Countdown, Sam Seder (in for Keith Olbermann) gave a run down of the whole situation. Here’s the clip from MSNBC: