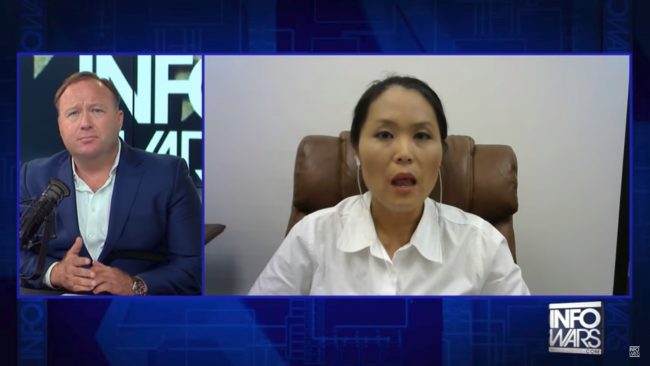 At this point, you’ve likely already seen the nutso Friday afternoon CNN segment featuring attorney Elizabeth Beck in which she was booted from a panel discussion after expressing her annoyance and asking “why am I being subjected to this.” You may also have seen her follow that up with an ultra pissed-off tweetstorm that saw her asking why CNN wasn’t covering 9/11 truther conspiracies.

Well, following the conspiratorial tone of Beck’s tweets this afternoon, maybe it shouldn’t be all that surprising to find out that she had been a guest at least two times on Alex Jones’ InfoWars.

Beck, who prior to today was probably best known as the attorney Donald Trump called “disgusting” for breastfeeding, appeared on InfoWars back in July 2017 to help push a conspiracy theory that Hillary Clinton was possibly involved in the murders of multiple men. That appearance included this moment, via T. Becket Adams, where Beck burst into tears as she declared that she “didn’t know what was going on.”

Beck showed back up a month later, this time speaking with the head honcho himself. Her interview with Jones took place after her class-action lawsuit for fraud against the Democratic National Committee was dismissed. Beck and her husband, along with other complainants, had pushed the lawsuit on social media with the hashtag #DNCFraudLawsuit.

Below is the video of that 18-minute appearance, chockful of speculation on certain deaths, via The Alex Jones Channel: