Life After Death For Vibe; Resurrected as Quarterly
VIDEO

Life After Death For Vibe; Resurrected as Quarterly 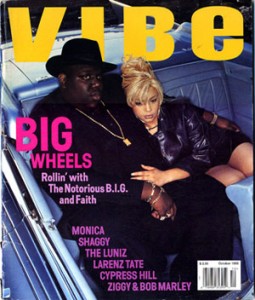 On the day Vibe collapsed at the end of June, the magazine’s founder Quincy Jones was pissed, and he wanted control of his title back. Jones told EbonyJet.com:“I’m trying to buy my magazine back now … They just messed my magazine all up, but I’m gonna get it back. You better believe it, I’m’a take it online because print and all that stuff is over.”

Jones may have been right that the future of Vibe is online, but he wasn’t able to to buy his magazine back (or maybe he just realized it was a terrible idea and decided not to try).

Ultimately it is another Vibe alumnus, former Vibe Group publisher Leonard Burnett Jr., who has regained control of the title. Burnett’s Uptown Media Group purchased the assets of Vibe and Vibe.com in partnership with Blackrock Digital, an online advertising group, and the private equity firm InterMedia Partners, which also owns Soul Train, according to The Wall Street Journal.

Vibe.com will return in the next few weeks, and Vibe will relaunch as a quarterly, beginning with a November/December issue. The new owners will reconsider Vibe‘s publishing schedule after 2010. Until then, circulation will be limited to 300,000 copies, according to the Journal. Vibe‘s rate base was twice that (600,000) before the close in June. Still no word on the financial details of the transaction.

Soul Train is due for a relaunch itself, and with the acquisition of Vibe and expansion of Uptown magazine, Intermedia will be well-positioned to dominate the market for African-American content consumers. David Koff, a senior partner at InterMedia, told Uptown:

Vibe is the preeminent brand in R&B and hip-hop. We feel privileged to purchase and resurrect such a storied brand … Together with the relaunch of Soul Train this fall and the rapid expansion of Uptown magazine, a reinvigorated Vibe enables us to serve a broad spectrum of the African-American audience with high-quality entertainment and information.

We still have to wonder what’s going to keep this iteration of Vibe from hemorrhaging ad pages like the last. Maybe BlackRock has some genius ideas for Vibe-Soul Train cross-promotions.

We caught up with some Vibe fans outside of a Cam’ron show in midtown on the night after Vibe closed. The resounding message was that everyone’s getting their hip-hop news online, if you can believe that. “Print is old school,” said one Sweet Baby Jesus from Queens.