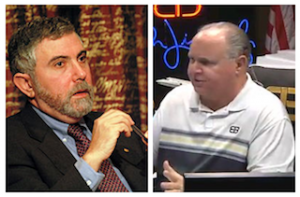 Since New York Times columnist Paul Krugman spoke at the Sixth & I Historic Synagogue in Washington, D.C. last month, a clip of his speech has been making the rounds in conservative circles. And it looks like it finally made it to Rush Limbaugh.

Limbaugh latched onto a specific quote from Krugman, which the Nobel Prize winner prefaced with a disclaimer:

“We’re going to need more revenue, we’re going to need, and probably in the end, surely in the end it will require some sort of middle class taxes as well… We’re going to have to make decisions about health care, not pay for health care that has no demonstrated medical benefits. So you know the snarky version I use, which is, I shouldn’t even say because it will get me in trouble, is death panels and sales taxes is how we do this.”

It was Krugman’s use of the term “death panels” that really upset Limbaugh. And he believes Krugman’s words deserve special attention because, as he explained, “Krugman is considered a near godlike figure on the left. Krugman is an Obamaite. When Krugman speaks, it may as well be the Democrat Party, the regime, and he has acolytes.”

Limbaugh proceeded to express incredulity with the fact that the left appears to celebrating Krugman for his remarks, or at the very least ignoring them, while Sarah Palin was pilloried for saying the same thing in 2009.

“Do you remember Obama and every other liberal going nuts over the accusation by Sarah Palin that there would be death panels?” Limbaugh asked his radio audience. “Everybody in the media, the Democrats went nuts and said there’s no such thing, and Palin was lying, and how dare she say this kind of thing?”

Limbaugh went on to list off all of the broken promises, as he sees them, that the Obama administration conveyed about the Affordable Care Act. And now, no less than liberal god Paul Krugman is openly saying that death panels are on their way. According to Limbaugh, if we’d only listened to Sarah Palin’s warnings when we had the chance, we wouldn’t have to hear Paul Krugman’s reality now.