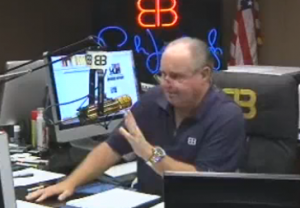 Newt Gingrich is getting an earful from conservative critics everywhere, and Rush Limbaugh is certainly piling on as well, but today Rush also asked “what if [Newt] isn’t serious about winning?” Rush suggested about Newt, “we know that he’s not stupid” and instead developed a theory to explain what he believes Newt’s true intentions might be.

Rush warned that Newt’s behavior of not lining up with conservatives is not unprecedented given that “we’ve had the Newt and Hillary show – we’ve had the Newt and Pelosi show.” Instead, Rush’s grand hypothesis is that Newt is purposely making statements that are “not intended to resonate with Republican primary voters” because Newt is trying to ingratiate himself with the “ruling class.” Rush suggested:

“If Newt can provoke attack from the conservative Republican contenders and even from the rank and file voters, by trotting on their sacred cows, which is what he did . . . in some people’s eye it makes him reasonable. With this crowd that I’m talking about, it’s a resume enhancement to be criticized by me. And he rises above the field.”

The harshest blow though comes at Rush’s suggestion that Newt is not only a “niche candidate” trying to carve out the RINO (Republican In Name Only) position in the race, but that he’s trying to be the next John McCain – the mainstream media’s favorite Republican. Concluding, Rush declared “being attacked by the right is a feature when you are thinking beyond the party nomination to your post-primary job prospects.” This speculation does seem like a stretch given the fact that up until now, Newt seemed very serious about winning. Although after this week of conservative heavyweights saying his campaign is “over,” maybe Rush just offered Newt a more promising strategy to pursue.