Limbaugh Unloads on Nikki Haley: GOP Wants to Drive Out All the Conservatives
audio

Limbaugh Unloads on Nikki Haley: GOP Wants to Drive Out All the Conservatives 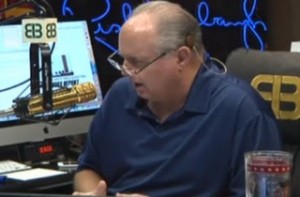 Today, on his eponymous show, conservative commentator Rush Limbaugh joined in the endless chorus of responses to the State of the Union response leveled by South Carolina governor Nikki Haley.

Limbaugh expressed surprise that Haley chose to target her own party’s frontrunners instead of devoting her entire speech to what President Obama had said in the State of the Union. He claimed that not only was her comment about resisting the loudest, angriest voices directed at the easy target of Donald Trump, but it was also meant for Ted Cruz, and even for him and all talk radio hosts.

Limbaugh shared his belief that the GOP selection of Haley to deliver the response is proof “that the Republican Party’s trying to drive conservatives out of the party”:

“While that isn’t anything new, what we learned last night is that they are very comfortable identifying themselves as elites and members of a club and that you can’t get in just by being who you are and doing what you want to do as a Republican and pursuing what you believe in … She wasn’t going after Trump the same way the party goes after the conservative base, or as Jeb Bush said, famously, that his objective was to win the Republican nomination without the support of the Republican Party base. That’s never been done before, and he was very proud saying so … and it became an objective of the party’s: To have a nominee that got the nomination specifically without the support of the base.

Listen to the full audio above, via The Rush Limbaugh Show.