Limbaugh: Women Wouldn’t Need Birth Control If They Didn’t ‘Do a Certain Thing’ 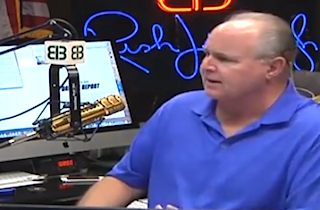 There were echoes of Rush Limbaugh’s infamous attack on Sandra Fluke in his commentary Wednesday about the Supreme Court’s Hobby Lobby decision, though he did not name any specific names this time. The radio host was ranting against Democrats like Hillary Clinton who have denounced the decision, which will allow closely-held companies to deny employees coverage for birth control, when he suggested there’s one easy way for women to avoid the need for birth control.

Repeating a question he received from a caller yesterday, Limbaugh asked, “When did birth control pills become so important to the human condition the federal government requires every insurance policy to cover them?” He noted that eye exams and dental work are not covered under the Affordable Care Act, but contraception is. “Which is worse, to go blind from lack of regular eye exams or to get pregnant?”

“Pregnancy is something that you have to do to cause,” he said. “It doesn’t just happen to you while you’re walking down the street, except in this case of sexual abuse.”

“But in the normal, everyday flow of events, pregnancy requires action that has consequences,” he continued. “Yet we treat it as a great imposition that women need to be protected from. It’s a sickness, it’s a disease, it’s whatever, and there’s got to be a pill for it. And yet they wouldn’t have the problem if they didn’t do a certain thing. It’s that simple.”

To reiterate Limbaugh’s message to women everywhere, just don’t do that “certain thing,” which we dare not mention on the radio, and you’ll have no need for birth control.

[h/t The Week]
[Photo via screengrab]