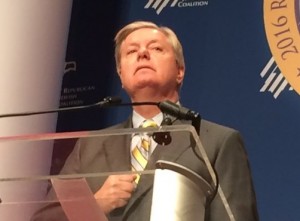 Republican presidential candidate Lindsey Graham‘s remarks to the Republican Jewish Coalition were trending Thursday morning. Why? Because the Republican senator from South Carolina went on a tear whose targets included fellow candidates, the Republican Party and the steps that led off stage.

According to Talking Points Memo, Graham opened by telling the crowd “why we lose” — the “we” meaning “Republicans.” His major points of contention ranged from railing against “turning out evangelical Christians” instead of “turning out evangelical Christians,” to arguing that “Donald Trump is destroying the Republican Party’s chance at winning an election we cannot afford to lose.”

Graham is currently polling at 1 percent, a fact he acknowledged repeatedly during his remarks. Yet the presidential candidate claimed he still has a shot in the election.

None of this really explains why Graham’s speech started trending on Twitter. Twitter, however, offers plenty of evidence as to why this happened. Whether sarcastic or serious, the “reviews” were legion.

Anybody who speaks immediately after Lindsey Graham at these cattle calls has drawn a terrible slot.

How is it Lindsey Graham never won one of those "funniest members of Congress" contests? The guy is a stitch.

Lindsey Graham is mumbling for effect?

Lindsey Graham going on about how great Canadians are

This RJC speech is summing up Lindsey Graham's crusade in this presidential race: Trying to push his party to a place where they win

Lindsey Graham to RJC: 'Don't you really want me to be President of the United States?'

His jabs at the likes of the Republican Party, terrorists, Ted Cruz, and John Kerry were favorites among the press.

Lindsey Graham, talking about rounding up undoc'd immigrants, to Republican Jewish crowd: "does that sound familiar to you?"

Lindsey Graham talking tough on terrorists: "We are going to kill everyone of these bastards we can find"

Lindsey Graham about Ted Cruz, basically: “I am tired of that crap."

Though perhaps the best moment of the speech came when Graham took on his most immediate adversary, the stairs.

Whoops! Lindsey Graham trips and nearly falls at end of his remarks at #RJCForum. https://t.co/pDXoQKdr4Y