‘Lock Him Up’: Celebrities React to Donald Trump’s Press Conference 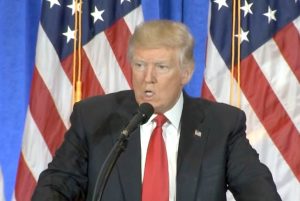 Today, President-Elect Donald Trump held a press conference during which he answered questions about hacking  and his tax returns (he won’t release them at this point), among other things. Lots of people watched and Tweeted, and celebrities, of course, were no exception. Not surprisingly, for the most part, they weren’t into what PEOTUS had to say:

did anyone else notice that the trump white house logo is basically the “no entry” symbol? pic.twitter.com/mzI522T1Bb

so the tactic is just to blame the media for everything?

Trump is brilliant deflector. Answers not one question.

So odd how Trump constantly projects: he hates “fake news” (which contributed to his win), and “Nazis” (who openly supported him in his run)

Trump is a chronic ORIGINATOR of fake news, such as Obama’s birth certificate obsession/lunacy and all the other lies he tells w no regard

It’s like watching a float in the Macy’s Thanksgiving Day Parade.

He could also still run Trump Steaks, bankrupt a casino and an airline while while ripping off students and not pay his contractors. https://t.co/bDr0tqyy2B

He wants us to know he is vindictive & it’s working well4 him. Astonishing the people who r known 4 speaking out NOT speaking out. Crushing

I’ve never seen anything like this press conference as long as I’ve been alive. We are in dark waters.

The “anti-Hollywood” candidate ended his press conference with his TV CATCHPHRASE. So if I’m ever Pres, I get to end with “What the deuce”?

We are truly in the golden age of irony