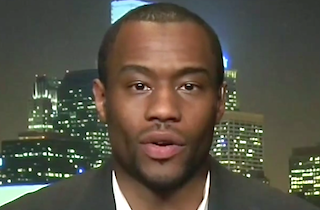 Trump’s position on Israel/Palestine is repugnant. His call for Palestine to “reject hatred and terrorism” is offensive & counterproductive.

Jeffrey Goldberg, editor-in-chief of The Atlantic, was somewhat taken aback:

A bit flummoxed by this tweet.https://t.co/q1HlpzIJpr

Hill responded by underlining that “perhaps because the context is missing. Peace will not come from demanding action from only one side.”

Secular Jewish blogger Lucas Lynch got into the back and forth as well:

… so @marclamonthill thinks Palestinians should embrace hatred and terrorism?

I don’t like Trump or Bibi, but I’m confused here. https://t.co/DOdKqcDJtO

@lucasjlynch no. I think that calls for only ONE SIDE to stop are problematic. It misframes the problem and the solution.

I probably agree w you regarding what the Israeli government should do, but ‘reject hatred and terrorism’ isn’t a controversial position https://t.co/08VP4AF0Gz

Hill further explained his point in subsequent Tweets on Friday. He also sparred with other Twitter users who piled on criticisms of left-of-center author:

In the remarks, Donald Trump essentially framed Israel/Palestine as a conflict that would be resolved if Palestinians would merely behave.

One could similarly say “peace will only come when settlement expansion stops.” But that, too, would be inaccurate and shortsighted. https://t.co/1aLRg9tiNH

We all agree that hatred and terrorism are bad things. The issue is who gets to define each term, and under what conditions. https://t.co/ycelkCHtIP

No. I find it offensive that you’re comparing Palestinian resistance to settler-colonialism to the actions of ISIS. https://t.co/ms9mfY3whY

No. I find it offensive to only call on Palestinians to “behave”, while normalizing/ ignoring the violence of the occupation. https://t.co/pAO413WgfG

So your position is that the West Bank isn’t occupied but Morocco is? Got it. ? https://t.co/mis0SRgRZ2

@danlevyesq trump suggested that peace would only come if Palestinians rejected hate and terror. That’s a dishonest and unhelpful narrative.

@danlevyesq and instead of actually reading my full remarks, you’re suggested that I’m pro-terrorism. That too is dishonest.