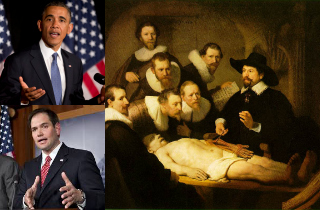 President Barack Obama made a crack at the expense of Art History majors last month, an off-the-cuff joke that has now induced an apology to a professor and a critique from Senator Marco Rubio (R-FL) over the state of the labor market.

He should have known better than that. He got many emails, one of which came from University of Texas-Austin professor Ann Collins Johns (she insists her missive was less outraged than extolling the benefits of her discipline). Obama apologized to Johns last week in a hand-written letter for the “glib remark”:

Let me apologize for my off-the-cuff remarks. I was making a point about the jobs market, not the value of art history. As it so happens, art history was one of my favorite subjects in high school, and it has helped me take in a great deal of joy in my life that I might otherwise have missed.

So please pass on my apology for the glib remark to the entire department, and understand that I was trying to encourage young people who may not be predisposed to a four year college experience to be open to technical training that can lead them to an honorable career.

He should have known better than that. Rubio took a shot at Obama’s apology Wednesday morning, calling it “pathetic”:

Pathetic Obama apology to art history prof. We do need more degrees that lead to #jobs via @POLITICO for iOS http://t.co/dy3OvLhLEc

Can’t we all come together to hate on psych majors?