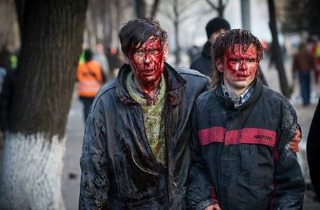 The abject naiveté with which President Barack Obama’s administration approached America’s relationship with Russia after coming to power was timidly underscored by its campaign-like slogan: “Reset.” In theory, this “reset” was to be an abandonment of the confrontational, “cowboy” diplomacy of the Bush years, but in practice it amounted to excess deference to Moscow and the creation of space designed to allow the Kremlin to pursue what it regards as its national interests.

The abandonment of American interests in an effort to provide Moscow with reparations for the perceived offenses of the previous eight years has evolved from puerile and foolish to downright irresponsible. Today, real lives are being lost and the world has been made less secure as a result of the president’s folly.

This administration’s prevailing ideological approach to Russia, one more forgivable in 2009 than in 2013, was recently articulated by Meet the Press host David Gregory during an appearance on Andrea Mitchell’s MSNBC program. He insisted that Obama had exposed the “great lie of the Bush administration” when he revealed, through inaction and blundering alone, that “the U.S. really can’t trust Putin.”

Gregory was opining on Putin’s single greatest offense — embarrassing Obama — after he granted political asylum to NSA leaker Edward Snowden. But Russia’s antagonism toward the West was evident to any interested observer. In spite of a series of overtures toward Moscow at the expense of America’s most willing allies, the U.S. was repeatedly rebuffed.

The White House angered the Czech Republic and Polish governments in 2009 when it unilaterally backed out of a Bush-era proposal to position interceptor missiles and radar installations in those countries. America’s Central European partners, acutely aware of Moscow’s designs for nations formerly in its sphere of influence, were more than frustrated by America’s wavering. The Obama White House later committed to dismantling American nuclear weapons and shelving fissile materials in exchange for Russia’s reciprocal decommissioning of intercontinental and submarine launched ballistic missiles and bombers. America delivered. Russia did not.

In spite of its failure to meet the necessary criteria, Russia ascended to the World Trade Organization in 2012. The diplomatic community, for whom the process is an end in itself, held as an article of faith that greater integration into the global community would have a moderating effect on Russia’s approach to foreign affairs. The opposite has been the case.

When the president stumbled into a foreign policy crisis in Syria, after being confronted with his own triggers for military action in that country’s years-old civil war, Obama consented to a “solution” to that crisis suggested by Bashar al-Assad’s benefactors in the Kremlin. Half a year after that so-called solution was reached, Syria has failed to dismantle its chemical weapons stockpile, peace talks in Geneva have utterly collapsed, and Moscow is actively arming Assad’s forces and blocking shipments of humanitarian aid to affected areas in Syria.

What was the United States’ response to this overt provocation? Secretary of State John Kerry meekly observed that Russia is “enabling” Assad and “creating an enormous problem” in Syria. This surely has Putin’s advisors quaking in fear of America’s next move. Estimates suggest between 99,000 and 150,000 have died in a conflict which is rapidly destabilizing the already explosive Middle East.

Now Moscow has its sights set on avenging what it views as a great historical wrong. More than two decades after achieving independence from the former Soviet Union, Kiev –- where Slavic culture was born and where everything it means to be Russian was first defined –- again has an executive friendly to Moscow. Putin, who famously insisted that the collapse of the Soviet Union was “the greatest geopolitical catastrophe of the century,” is not letting this opportunity pass.

Against the wishes of the public, the Ukrainian government bowed to pressure from Moscow and is resisting a push to integrate further with the European Union. The result of this impasse has been violence and death, with nearly 30 Ukrainians being killed by police in the past 24-hours.

The State Department, quietly working behind the scenes to facilitate a peaceful transition to a friendly but not revolutionary Ukrainian government, was dealt a spectacular blow by Russian security officials who intercepted and released a call featuring Assistant Secretary of State Victoria Nuland casually announcing that U.S. policy was to “f**k the E.U.” – the very institution for which protesters on the ground were fighting. The call was even more embarrassing because it revealed that the U.S. regards Vitaly Klitschko, the opposition’s charismatic face, an impulsive actor that has not earned Washington’s trust.

Moscow stumbled upon a gold nugget with that call and dealt America’s influence in the region a great blow by releasing it.

As violence escalates, Russia’s position in the East of Ukraine – an area of the country which identifies more closely with Russia than with Europe — grows more secure. On Wednesday, Crimean ministers of parliament began openly flirting with returning that strategically vital peninsula, where a Russian naval base on the Black Sea is housed, to the Russian Federation.

Amid all of this, the White House cannot even be moved to issue a public statement in support of the protesters and in favor of self-determination. The affable Vice President Joe Biden has been dispatched by the administration to issue a stern warning to Kiev demanding it pull back its forces currently slaughtering protesters in city squares. That should show them we mean business.

Russia does not regard the United States as a wholly innocent actor in this drama. From NATO’s Eastward expansion, in spite of promises to the contrary, to Washington’s refusal to facilitate the extradition of Russian citizens accused of crimes, Moscow has its gripes with the United States. This condition is not the result of a failure of diplomatic courtesy or a lack of regard for Russian interests. Moscow and the United States define what is in their advantage in opposition to one another. It’s high time for the Obama White House to recognize this and become a sober and rational steward of American interests in the region.

Real lives are being lost as Russia reasserts itself as a geopolitical actor of relevance, and America is presently complicit in that bloodshed. It’s time for the United States to wake up to the realities of post-Soviet geopolitics and for the White House to speak plainly about those realities. If Moscow is not a partner in the new global order, it is an adversary and it is time to treat them as such.