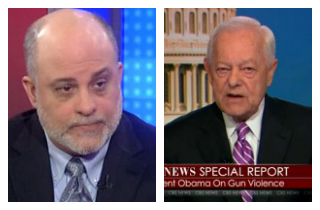 After CBS reporter Bob Schieffer compared taking on the gun lobby to ending segregation or America defeating the Nazis in World War II, conservative radio host Mark Levin bashed the journalist as a “phony” who is a “propagandist” acting as a “cheerleader” for the Obama administration.

“You should hear the media today. It’s pathetic. If we were talking about the First Amendment as I’ve said repeatedly, they’d be going nuts about a dictator,” Levin began. “But because we’re talking about the Second Amendment, they cheer him on. Where’s this jerk from CBS, this Bob Schieffer, this dinosaur?”

Schieffer appeared on CBS after Obama’s gun control press conference, calling it one of the president’s “best speeches” and reminding the audience that the gun lobby is less formidable compared to tougher obstacles America faced in the past, such as defeating the Germans in WWII and passing civil rights legislation despite a segregationist South.

He continued: “Defeating the Nazis a more formidable task than taking on the gun lobby? You know what, Bob Schieffer, you’re a very sick old man. You really are. Your liberalism often now spews out, spews forth like somebody who’s heaving. You pretend you’re a newsman. You’ve been around for at least a century. How pathetic you are.”

The harsh words didn’t end there. Levin went on to call Schieffer a “propagandist,” a “jerk,” a “little nobody,” and an “idiot”:

I want to explain something to this phony journalist, to this pretend dinosaur here. We can’t stop murder in federal prisons you idiot. We can’t in state prisons, in county jails, in city jails where people are behind bars, where the government controls their every movement, when they take a crap, when they take a shower, when they eat their meals, when they exercise. Everything is controlled, and we can’t control murder and rape and assaults in our prison system. And suddenly, it’s not the country he remembers if we can’t prevent these things in the future.

Levin concluded: “The facts don’t matter to Bob Schieffer. Bob Schieffer’s a cheerleader. He’s a clapping seal. Somebody give him a ball so he can balance it on his nose.”