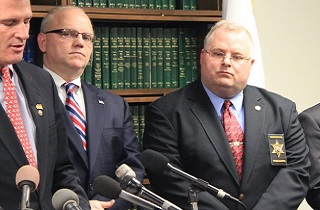 McDonald offered a joke about Barack Obama being visited in a dream by three past presidents, who offered advice on how to improve the country. Lincoln’s advice: “Go to the theater.”

It probably would have gone over better if Lincoln had told President Obama to go to a Ted Nugent concert. Then, instead of being shot in the head, the President would simply be subjected to the aroma of Nugent crapping his pants.

The blog Blue Mass Group notes that The Boston Globe removed the joke from their report of the event, without explaining why. A source at The Globe confirmed, to Mediaite, that there was no question about the accuracy of the account. The source did not further explain the editorial decision.

It’s hard to tell what’s worse, these days: a Republican who jokes about the assassination of President Obama, or one who’s serious about slavery being a perk-filled golden hammock. That’s okay, though, because Republicans have a plan, and they’re sticking it to you.

Update: ThinkProgress reports that McDonald is defending his joke, and comparing his critics to Nazis.