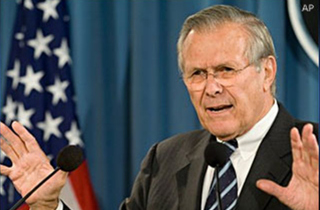 Today marks the tenth anniversary of the day the U.S. invaded Iraq under false pretenses and bad intelligence, as part of the neoconservative George W. Bush‘s Wilsonian adventurist foreign policy. Several hundred-thousand civilian and military lives later, many Americans are still unsure why we ever got involved… or why the president got away with such actions… or why the media was largely complicit in accepting the administration’s word.

But hey, you all should really show your respect and appreciation for the lovely Bush officials who got us tangled into that mess, says former Defense Secretary Donald Rumsfeld. To celebrate(?) the tenth anniversary of his shining moment or whatever, Rumsfeld tweeted out the following:

Suffice it to say, Twitter users did not drop everything and salute the former Bush cabinet member. Instead, they expressed just how much they dislike him and the Iraq War, blasting off a flurry of negative responses. To wit: 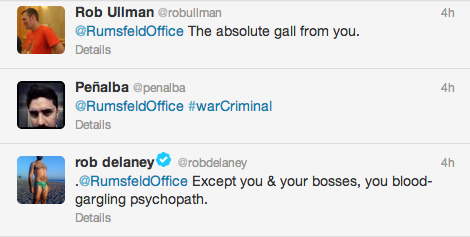 But wait, that’s not all. Not only did comedian Rob Delaney‘s tweet get 400+ retweets, but the list of other ticked-off tweets goes on and on and on and on. Some of the best tweets include the subtle “lol.” response, laughing at Rumsfeld’s obliviousness. (This is, after all, the same official who said on February 7, 2003, that this operation “could last six days, six weeks, I doubt six months.”)

Of course, plenty of other tweets are predictably awful. But there are plenty of tamer tweets, of the “I don’t like you,” “you are a war criminal,” and the sarcastic “you know you tweeted that aloud, right?” varieties.

We’d show you just how long the list goes here, but it’d just be easier to link to it (log into Twitter to view… and then just keep scrolling down to refresh the full list).