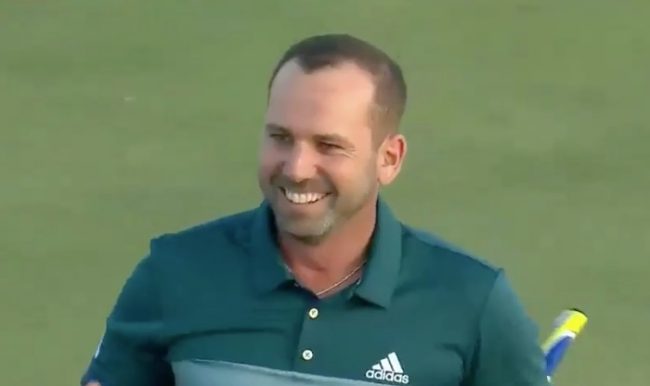 Despite a thrilling finish where Sergio Garcia won his first major after nearly two decades of knocking on the door, Sunday’s ratings for the final round of The Masters hit a 13 year low for the event.

According to the industry tracking website Sports Media Watch, the biggest event of the golf season received a 7.6 overnight rating for CBS on Sunday. That’s the lowest Masters final round rating since 2004, when Phil Mickelson won his first green jacket with a birdie on the 18th hole.

Historically, the ratings for The Masters have been lower during years when the final round fell on Easter Sunday — as it did in 2004 and 2012. But this year the ratings were way down despite the tournament not concluding on Easter.

Tiger Woods did not play in the tournament this year (but he also didn’t play last year), and the 2016 Masters final round still garnered an 8.5 overnight, beating this year’s number by 11 percent. Still, there’s little doubt that Woods’s injury woes in recent years have been a key factor in the tournament’s declining TV ratings. According to Sports Media Watch, three of the five lowest-ever final round overnights for The Masters have come during the last four years, when Woods missed the events.

Other stars like Rory McIlroy and Phil Mickelson were, for the most part, out of contention by Sunday afternoon — which also likely contributed to the poor rating.

In what is undoubtedly the most unique TV rights deal in all of sports, CBS has broadcast The Masters for 62 consecutive years, always on a one-year contract, according to Forbes. Commercials are limited, as there are only three sponsors. And CBS, per Forbes, does not profit from the telecast.