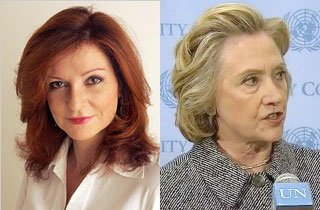 In today’s edition of Guess Who’s Piling On Hillary Clinton For Her Email Scandal Today?, New York Times columnist Maureen Dowd took her turn at the former Secretary of State.

“It has come to our attention while observing your machinations during your attempted restoration that you may not fully understand our constitutional system,” she writes. “Thus, we are writing to bring to your attention two features of our democracy: The importance of preserving historical records and the ill-advised gluttony of an American feminist icon wallowing in regressive Middle Eastern states’ payola.”

Most of Dowd’s column took aim at Clinton’s well-covered secret email server and the deletion of quote unquote personal emails. (“If you, Hillary Rodham Clinton, are willing to cite your mother’s funeral to get sympathy for ill-advisedly deleting 30,000 emails, it just makes us want to sigh: O.K., just take it.”) She also took some time to slam Hillary for the Clinton Global Initiative’s cozy relationship with Saudi Arabia, especially the part where they take money from a regime that subjugates women, and use that money to promote women’s rights.

In short, Dowd accused Hillary of exploiting feminism for her own goals — an accusation she’s lobbed at the former First Lady for years, but ramped up in this column:

The subtext of your news conference cut through the flimsy rationales like a dagger: “You can have the first woman president. You can get rid of those epically awful Republicans who have vandalized Congress, marginalized the president and jeopardized our Iran policy. You can get a more progressive American society. But, in return, you must accept our foibles and protect us.”

You exploit our better angels and our desire for a finer country and our fear of the anarchists and haters in Congress.

Instead of raising us up by behaving like exemplary, sterling people, you bring us down to your own level, a place of blurred lines and fungible ethics and sleazy associates. Your family’s foundation gobbles tens of millions from Saudi Arabia and other repressive regimes, whose unspoken message is: “We’re going to give you money to go improve the world. Now leave us alone to go persecute women.”