Mediaite Exclusive: Dominique Strauss-Kahn Tells Pals “I Am Not Running For President” 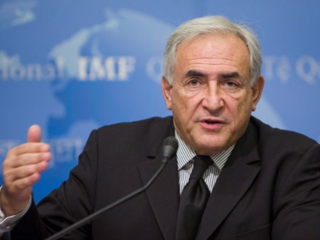 With the New York media abuzz that prosecutors are preparing to drop the rape charges against former IMF chief Dominique Strauss-Kahn, many here and in his home country of France are stirring up speculation that he could be on the verge of re-starting his political career by running for President of France — as expected before the scandal erupted. But Mediaite has learned that Strauss-Kahn himself appears well aware that he has no immediate political prospects and that a run for President right now is simply not in the cards.

While the speculation surrounding his potential bid was fueled both by Strauss-Kahn’s past before the charges were filed and a New York Post report Sunday that his strategic guru, Stephane Fouks, hopped a jetliner specifically to provide advice to Strauss-Kahn, that campaign appears not to be happening anytime in the near future. A source close to the former IMF chief tells Mediaite, “DSK is telling friends that media speculation that he might run is simply absurd. Of course he is pleased that despite the recent headlines, the media is suddenly declaring him a viable candidate, but he knows in the real world that is just not the case.”

Mediaite is told that while PR man Fouks is in town and did meet with his friend Strauss-Kahn, he was long scheduled to be in New York to confer with colleagues from his firm Euro RSCG and an investment bank about ongoing public relations work. So while the Post story began with “let the spin begin,” it seems that spin won’t have anything to do with Strauss-Kahn running for President, nor did it appear to be remotely impromptu.

We don’t pretend to know enough about French politics to predict whether Nicolas Sarkozy has the political punch to win another term, but even Strauss-Kahn’s closest associates recognize he still has a long way to go legally, personally and politically before he can even begin to consider running for anything. That will be a bridge he will have to cross when he gets to it, as his immediate goals are far more parochial, getting New York prosecutors to drop the charges against him.