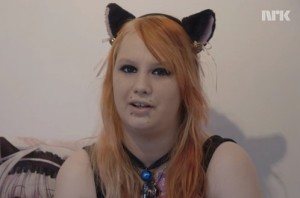 In a recent interview with Norweigen radio channel NRK P3, a 20-year-old woman says she identifies as a cat.

The woman, who goes only by Nano, says she’s been a cat her entire life. “I realized I was a cat when I was 16 when doctors and psychologists found out what was ‘the thing’ with me. Under my birth there was a genetic defect.”

Since coming out as “born in the wrong species,” Nano hisses at dogs she walks past, meows at strangers, hates water, and claims to be able to see in the dark. She also walks around on all fours and sleeps on windowsills.

“My psychologist told me I can grow out of it, but I doubt it,” she says. “I think I will be cat all my life.”

Nano is the first person to publicly identify as a cat, although Fox’s Andrea Tantaros received criticism for joking about doing so after Caitlyn Jenner‘s transition to a woman.

Watch above, via NRK P3.