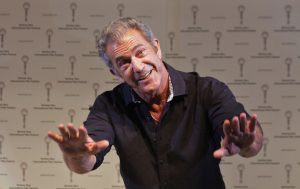 Mel Gibson told Variety that he found it somewhat “annoying” that people still invoke the ten-year-old story of him making anti-Semitic comments to a police officer. The actor/director argued further that there was no evidence that he had ever actually discriminated against anyone.

In 2006 Gibson was pulled over on the suspicion that he was driving under the influence. According to a police report, he told the officers, “Fucking Jews. The Jews are responsible for all the wars in the world.”

Gibson described the encounter to Variety as an “unfortunate incident.” He continued:

I was loaded and angry and arrested. I was recorded illegally by an unscrupulous police officer who was never prosecuted for that crime. And then it was made public by him for profit, and by members of — we’ll call it the press. So, not fair. I guess as who I am, I’m not allowed to have a nervous breakdown, ever.

[…] For me it’s a dim thing in the past. But others bring it up, which kind of I find annoying, because I don’t understand why after 10 years it’s any kind of issue. Surely if I was really what they say I was, some kind of hater, there’d be evidence of actions somewhere. There never has been.

He argued that there was no evidence he had ever discriminated against anyone in his life, and for him to be judged on account of a single drunken episode was “unfair.”

Speaking to Hollywood Reporter two years ago, Gibson was similarly eager to move on. “It’s behind me; it’s an 8-year-old story. It keeps coming up like a rerun,” he said in 2014.