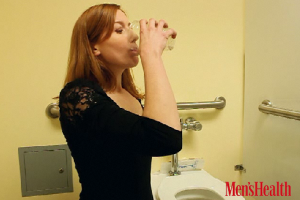 Recently, Men’s Health wrote an article on “The 7 Germiest Places”. Basically it’s a list of things you touch every day that are actually covered in bacteria so that, after you read it, you spend the next week walking around with an industrial-sized vat of Purell (thanks, Men’s Health). After it was published, there was apparently some kind of argument in the MH office with Senior Associate Editor Amy Rushlow arguing that a public toilet was much, much cleaner than anything in the list. To prove…something…she then drank a glass of toilet water and filmed it. Yeah, I’m pretty sure the only thing proven is that you shouldn’t get in a game of Chicken with Amy Rushlow.

“’If everything you touch is germier than a public toilet, then public toilets are actually clean—the public toilet comparison is just this way to make people think they need to sanitize everything. Fact is, you could probably drink out of a freshly cleaned, well-rinsed public toilet and be just fine. Come on, who’s willing to try it?’

Needless to say, there were no takers. So I decided to prove my point. But first, I consulted with University of Arizona germ expert Chuck Gerba, Ph.D., asking—hypothetically, of course, Chuck—what would happen should someone drink from a toilet? His take: ‘There aren’t too many studies on it. You would get a small number of bacteria. I still wouldn’t drink out of it.'”

See, guys? She’s not crazy. Before she totally asked a Professor if it was safe.

…and then he told her not to do it.

…and then she did it anyway.

Oh, well. It certainly resulted in a fun video. Watch it below and…learn something.