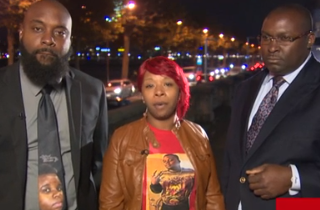 Michael Brown‘s family announced today that they would pursue civil charges against the Ferguson Police Department and Officer Darren Wilson after a report from the Department of Justice released a report accusing the department of systematic racism and abuses of power.

Along with the report, released yesterday, the DOJ also announced that they would not press federal criminal charges against Wilson, the man who shot Brown, saying there was not enough evidence to disprove his claim that he was acting in self-defense.

“While we are saddened by this decision, we are encouraged that the DOJ will hold the Ferguson Police Department accountable for the pattern of racial bias and profiling they found in their handling of interactions with people of color,” Brown’s parents said in a statement yesterday, via the Washington Post. “It is our hope that through this action, true change will come not only in Ferguson, but around the country. If that change happens, our son’s death will not have been in vain.”

An attorney for Brown’s family told the Post that they were “officially in the process of formulating a civil case that we anticipate will be filed shortly on behalf of the family.” Wilson will also be named in the suit, according to Fox News.

Yesterday’s 100-page report detailed stunning abuses by the Ferguson police department, who, under the pressure of the municipal court system to boost revenue, regularly showed a bias against African-American residents of Ferguson.