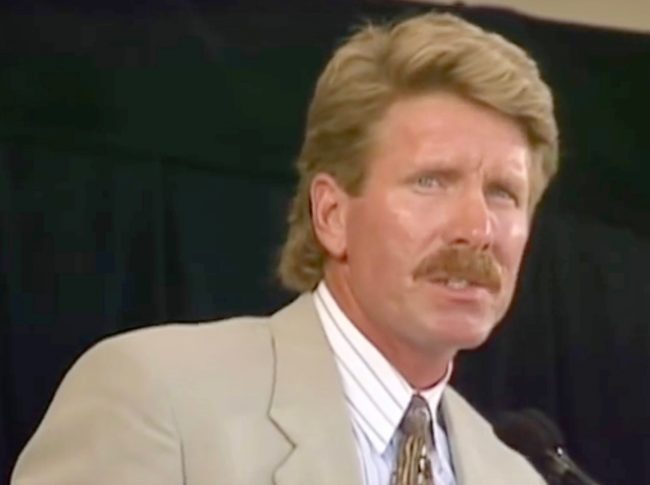 Hall of Fame baseball player Mike Schmidt is under fire for comments about a Spanish-speaking Philadelphia Phillies player, whom Schmidt does not believe is capable of leading the team because of the “language barrier.”

Speaking on WIP Radio in Philadelphia, the retired Phillies great said that the team’s current centerfielder, Odubel Herrera, is not a player that the team should build around because of, in part, the fact that he doesn’t speak fluent English.”

“[I]t’s a language barrier,” Schmidt said. “Because of that, I think he can’t be a guy that would sort of sit in a circle with four, five American players and talk about the game. Or try and learn about the game or discuss the inner workings of the game. Or come over to a guy and say, ‘Man, you gotta run that ball out.’ Just can’t be — because of the language barrier — that kind of a player.”

Schmidt is also not enamored with Herrera’s style of play, which he believes shows up other teams.

Fans, sports writers, and others on Twitter reacted swiftly to the comments:

Mike Schmidt said today an MLB team can’t build around a player/leader who doesn’t speak English first. Someone tell that to David Ortiz.

Remember when Hideki Matsui accepted his 2009 World Series MVP trophy with his translator by his side? Mike Schmidt does not. https://t.co/xUM0sgDDga

Mike Schmidt is an embarrassment to the @Phillies organization and to baseball in general pic.twitter.com/UDeRBaO8O4

Remember how, in 1980, Mike Schmidt helped get Manny Trillo out of a slump by giving him a pep talk in Spanish? https://t.co/dBB9lAxRCF

According to Mike Schmidt, Odubel Herrera can’t be a team leader because English isn’t his 1st language…? https://t.co/rh5VTHYr3M

It’s legitimate to ask whether Odubel Herrera is good enough for Phillies to build around. But “the language barrier” cited by Mike Schmidt…

what’s strange is schmidt doesn’t think anyone is capable of picking up a new language. https://t.co/9iCyvnb8tZ