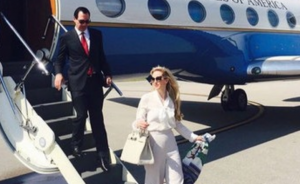 A few days after Treasury Secretary Steven Munchin‘s wife — Lousie Linton — pimped out her taxpayer funded wealth on Instagram, a watchdog ethics group is investigating if the couple used government funds to fly to Fort Knox, Kentucky for a better view of the solar eclipse.

We just FOIA’d all records for Mnuchin & Louise Linton’s trip to KY on a gov’t plane. There’s more to this story & we’re going to find it. pic.twitter.com/3wsMdveuUI

The two watched the eclipse from the rooftop of Fort Knox — fittingly above billions of dollars worth of gold. Mnuchin also showed up with Senate Majority Leader Mitch McConnell in Louisville to attend an event earlier that day.

The group, Citizens for Responsibility, is digging into records of the trip — the same trip that Linton posted a photo to social media stepping off a military jet flaunting her designer threads and accessories. Linton subsequently went off on a rant directed at an internet commented in which she bragged about her husband’s public service and just how much they pay in taxes.

“Cute! Aw!!! Did you think this was a personal trip?! Adorable! Do you think the US govt paid for our honeymoon or personal travel?! Lololol. Have you given more to the economy than me and my husband? Either as an individual earner in taxes OR in self sacrifice to your country? I’m pretty sure we paid more taxes toward our day ‘trip’ than you did. Pretty sure the amount we sacrifice per year is a lot more than you’d be willing to sacrifice if the choice was yours.”

The Treasury Secretary’s wife went on to apologize, delete the photo, and set her Instagram to private mode.