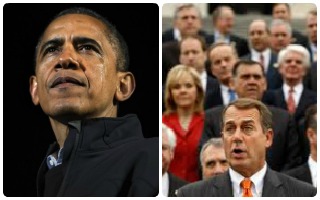 The White House knows it. Congressional Republicans sure know it. Both are vocal about this reality, but the pundit class has not yet caught on. The passing trivialities that dominate the 24-hour news cycle, which seem so imperative in the moment but fade in relevance with predictable alacrity, blur longer-term trends. Some in the pundit class, however, are beginning to catch on. They take history into account and conclude, perhaps reluctantly, that Congressional Republicans have a hand in their ongoing political battles with President Barack Obama. The president, as he has said repeatedly for anyone who cares to listen, is running out of time. Time is, in fact, on the GOP’s side.

“I’d like to get as much stuff done as quickly as possible,” President Obama told a local San Francisco news station reporter on Wednesday. “Even though I’m just starting my second term, I know that, you know, once we get through this year, then people start looking at the midterms, and after that, they start thinking about presidential elections.”

“Now’s a good time for us to get some things done,” Obama added.

President Obama is nothing if not a voracious student of American political history. He is deeply conscious of how he wants to be seen through the lens of posterity. This is why, months into his first term, Obama took a meeting with presidential scholars and historians – he always wanted to have a historic presidency, and has always managed his political career so as to have the most lasting impact on future generations.

Those close to the president have said on several occasions that Obama, like all presidents entering their second term, has about one year to 18 months to enact serious reforms before the pressures of politics and “succession obsession” dominates the national conversation.

Obama has been working fast with a broad focus: new gun laws one moment, comprehensive immigration reform the next. He flirted with promoting environmental regulations in his State of the Union address, as well as raising the federal minimum wage significantly.

The president is motivated, at least in part, by his legacy. It is unclear whether the massive health care overhaul that Obama signed into law in his first term will serve as a lasting achievement viewed positively by a majority of the electorate. Even before the law has been fully implemented, businesses are already cutting back employees’ hours and health care costs for the currently insured are on the rise. History’s judgment on the Affordable Care Act is presently mixed.

Therefore, it is Obama’s job to usher in meaningful reforms in his second term – the most promising being a reform of the immigration system that leads to citizenship for most of the nation’s 11 million illegal immigrants.

But nothing can be done without the consent of Congress – the lower chamber of which is dominated by the opposition party. Presently, really since the tea party’s ascension, budget battles have dominated Washington. Today’s fight over “sequestration” was born in 2011 and is essentially an extension of the same issues that have dominated Washington since the 2010 midterm elections: how best to implement federal spending and debt reduction measures.

Budget tweaks do not a legacy make. Just ask former President Bill Clinton. Budget battles dominated the Clinton presidency for the entirety of his first term and a large part of his second term. He raised income tax rates and is the last president to preside over a balanced budget. But this achievement cannot be said to have defined the Clinton presidency, particularly since both the tax rates and the balanced budget were undone by his immediate successor. Budget battles rarely constitute a legacy achievement.

Obama wants to be able to sign major social reforms into law on the scale of President Lyndon Johnson’s Great Society. However unpopular Johnson was at the close of his first and only full elected term in office, his achievements ensured that the judgment of history would at least be measured if not kind.

The president and his opponents in Congress know he is running out of time. As they always do, exogenous factors will soon interrupt Obama’s pursuit of a domestic legacy achievement. A European debt crisis or an Iranian nuclear breakout could derail Obama’s legislative goals with little warning.

More than just time is on Republicans’ side. Shockingly, public opinion is as well. Despite a headline which employs the misdirection of your average Penn & Teller performance, USA Today, partnering with Pew Research Center, released a poll today that showed Republicans have some leverage on budget issues

“On issues, [the] public is more aligned with Obama than GOP,” read USAT’s headline. And that’s true for every issue that is not dominating the agenda in Washington. In that survey, Pew/USAT found that 70 percent of voters think “major deficit legislation” is “essential for the president and Congress to act on this year.” That total includes 81 percent of Republicans, 65 percent of Democrats, and 70 percent of independents. 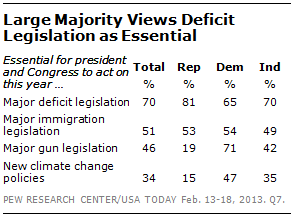 What’s more, 76 percent favor a “balanced approach” to resolve the sequestration crisis (as they probably will for the variety of crises that are coming down the pike). Of those, 54 percent say that the “balance” should favor spending cuts. Just 16 percent say that tax hikes should make up the bulk of the deal. Again, the public favors the Republican approach. 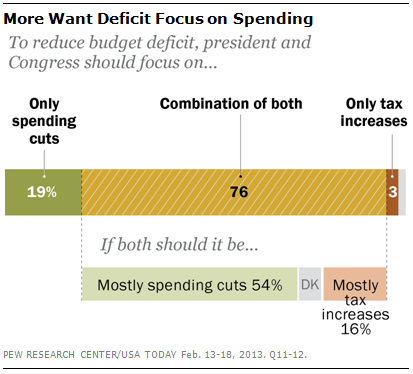 Other public polling shows Congressional Republicans will get most of the blame if the sequester goes through, but the average member of Congress cares little for the institution’s overall approval rating. In the absence of a wave of anti-incumbent sentiment, House members are secure in their belief that their actions in February, 2013, will not sink their electoral prospects in November, 2014.

Republicans read the political tea leaves and see a brighter future than virtually all of the pundit class. All, that is, but a select few of prescient writers like National Journal’s Ron Fournier who recently applied a generational perspective to the present set of political circumstances in Washington. His verdict: plenty of opportunity for short-term gains by Obama, but the pursuit of those short-term gains may mean forgoing a legacy achievement.

“If it’s all about politics, bully for Obama. A majority of voters will likely side with the president over Republicans in a budget dispute because of his popularity and the GOP’s pathetic approval ratings,” Fournier writes. “If it’s about governing, the story changes: In any enterprise, the chief executive is ultimately accountable for success and failure.”

“Even if he’s right on the merits, Obama may be on the wrong side of history,” Fournier adds. He recommends that the president and his party rethink their refusal to propose a meaningful debt reduction plan that embraces significant entitlement reforms.

Obama’s endless hectoring of the electorate, lobbying for a cornucopia of progressive dream programs that will never come to pass, masks his own fear that the more narrow goals he hopes to achieve before the spring/summer of 2014 may be unattainable. He rallies the troops to keep the pressure on Congress, but Congress can afford not to listen.

Time is not on the president’s side, as Obama himself has made clear on numerous occasions. Even if the press has not been listening, the GOP has.