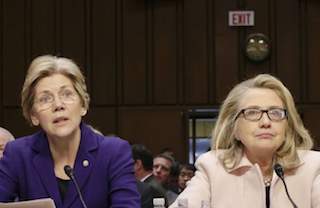 There are several headlines around the web today touting a new poll that shows Sen. Elizabeth Warren (D-MA) leading Hillary Clinton in early caucus and primary states Iowa and New Hampshire. While this news might “shock” some, a closer look at the questions shows how the YouGov poll, sponsored by big-time Warren supporter MoveOn.org, got the data it wanted for its Run Warren Run campaign.

“To know Elizabeth Warren is to want her to run for president, according to a YouGov survey of likely Democratic Iowa caucus goers and New Hampshire primary voters recently conducted on behalf of the Run Warren Run campaign,” the group writes in its press release about the poll. “The results show that, after likely caucus goers and primary voters learn about Elizabeth Warren’s biography and issue positions, not only do a stunning 79% say they want her to run, but, in both states, Warren ends up leading all other potential Democratic candidates in a head-to-head ballot question.”

It’s true that the survey, which polled a total of 800 likely Democratic votes (400 in each state), revealed a slight edge for Warren over Clinton on both Iowa and New Hampshire. But that is after respondents were given a copious amount of positive information on Warren and nothing on Clinton.

MoveOn does acknowledge this fact writing, “Once voters are informed about her (and with no negative information provided about any candidate), Elizabeth Warren leads the field with 31% support in Iowa and 30% in New Hampshire, followed by Hillary Clinton with 24% and 27% support, respectively.”

The poll and its promotion are all part of MoveOn’s effort to draft Warren, who insists she’s not running for president, as a viable Democratic challenger to Clinton. But unless she can run virtually unopposed, the results don’t say much about her chances of actually winning.

View the full poll results below: