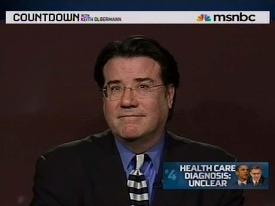 Writing on his blog at CQPolitics.com, Crawford says he has found the network “unrewarding for me,” – and expands on his reason for leaving in a comment to Mediaite.

Crawford last appeared on MSNBC on February 5, as a guest on Countdown with Keith Olbermann, where he regularly appeared (according to TV Eyes). The blog post came exactly one month after that appearance. Crawford wrote:

Three months short of my current contract I sent the following to the boss, Phil Griffin: “Phil, Just wanted to give you the heads up that my situation with MSNBC has become so unrewarding for me that I’ve decided to move on. — Craig”

But he really expanded on the reasoning in the comments:

i simply could not any longer endure being a cartoon player for lefty games, just gotta move on to higher ground even if there’s no oxygen

i have never and never will forgive Chris for calling me a racist after the West Virginia primary (the last time I will ever go on air with him). Probably should have resigned then and there, but better late than never.

We asked Crawford what he was referring to regarding Chris Matthews, and to expand on why he left the network. He responded by email:

I haven’t felt like a good fit for MSNBC since the presidential campaign, and the hard turn toward point-of-view programming. No particular event brought this on, just my desire to try other outlets and have more fun. As far as Chris is concerned, on Morning Joe after the West Virginia primary he accused me of always defending Clinton and what he claimed to be her racially motivated campaigning. That’s the problem. Trying to be fair became seen as bias in the new thinking over there. But I do wish my many pals at MSNBC nothing but good things.

This appears to be that incident from Morning Joe.

The decision by a Countdown regular to leave MSNBC because of his the way he perceives the network is a notable one. Although Crawford isn’t purely left-wing, he is a commentator that represents the left perspective. His exit, and his reasoning, show some level of discontent among those who may be politically on the same team at MSNBC.

Crawford says on his blog he will be on Fox & Friends as a guest on Monday, although FNC says he won’t be. He also writes in the comments that he is a “free agent.”