Has The Internet Turned Its Back On Team Obama? 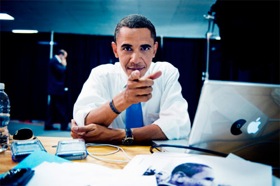 The internet has made definitive revolutionary changes in the way Americans consume their media and interact with their federal government– not exactly a shocking statement. But Michael Scherer at Time Magazine is now proposing that the most tech-savvy government in history is being hurt by its inability to control the flow of information (and misinformation) online.

Since its enemies are constantly in campaign mode while the Obama administration is beleaguered with the arduous task of actually governing, administration officials are having a harder time keeping up with the attacks and their sources than they ever have before. While it seems counte-rintuitive to consider the internet Barack Obama‘s enemy, Scherer might have a point in that a great chunk of the political blogosphere is now the stomping grounds of Republicans, Tea Party activists, and even the radical leftists that resent Obama’s attempts at bipartisanship.

Scherer’s conclusion that the Obama administration is being severely hindered by its complete lack of control over the media is based on his redefining of “news media” to incorporate every important yet often unclassifiable part of the web. It’s as conclusive as it is terrifying. Did you know that “Sarah Palin’s Facebook page, the latest Internet attack videos and that e-mail your aunt just sent you” count as essential elements in “the news cycle”? As much as traditional media might deny it, Scherer is absolutely right. The internet has equalized the playing field such that respected news sources are obsolete and irrelevant, meaning that any way White House opponents may choose to reinterpret their message is fair game. Take for example, the health care debate last summer:

A single phrase — “death panels” — nearly derailed health care reform, as town halls were flooded with angry voters who got their information online. That there was no proposal for anything that resembled a death panel did not matter; the idea went viral anyway.

It is in Scherer’s reasoning of why the Obama administration is losing its battle with the internet where his theory cracks a bit. Rather than point to the simple fact that one very media-savvy group of people could never stand a chance against the innumerable hordes of angry bloggers, he blames the fact that Obama and friends have a job to do: governing. He explains (emphasis mine):

But in a year-end review of communications performance, Pfeiffer and Dunn found that the President often lost control of the conversation by focusing too much on governing while the opposition campaigned against him, exploiting the cyclone’s appetite for controversy even when it lacked a foundation in fact.

Focusing too much on government would probably not have been such a problem if the President were not so vocally championing his views according to statistics Scherer provides himself. 129 press interviews, four prime-time press conferences, two major Congressional addresses and “countless daytime events” do not add up to “too much governing.” That said, the internet is a world where anyone with an opinion can spew it out, and those who would follow it are open to do so regardless of the evidence against it. Obama never really stood a chance.
[photo via Computer Weekly]