My Response to Those Trying to Get Me Fired from Mediaite 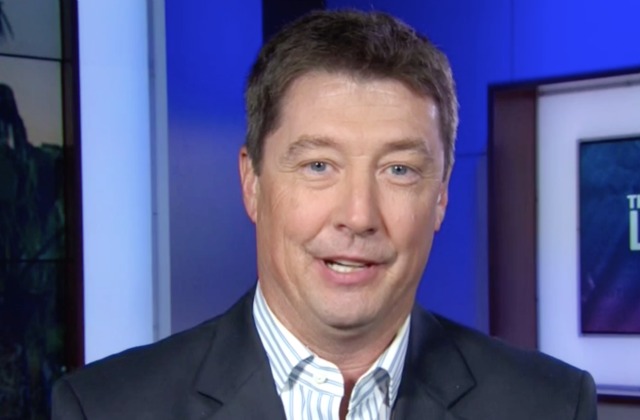 If you are a reader of small, far-left websites, there is a chance that, over the last couple of days, you have heard that I am awful person who should be fired from Mediaite due to my investigation of the entire “Penn State Scandal.” Based on one laughably inaccurate story from an unknown “journalist” — who never bothered to seek comment from me — some people now apparently believe that I have “stalked” the “victims” of Jerry Sandusky and revealed their identities and private contact information.

This allegation is not only false, but a pure fantasy.

Normally, I wouldn’t even bother to set the record straight, but the Mediaite editors wanted to give me the opportunity to respond, which I am more than happy to do. In fact, I strongly believe that even a cursory understanding of the real truth of this matter will give open-minded people a clear view of what really happened in the case itself.

I have made a lot of mistakes in my crusade for justice and media responsibility in this case, but mistreating those who are accusers of Sandusky is NOT one of them. In fact, I now strongly believe that I have, in general, been too respectful of some of these grown men. When you understand the full story, I think that you will agree with me.

Like almost everything about this crazy story, which exploded almost six years ago with the sudden firing of legendary football coach Joe Paterno (just four days after Sandusky’s arrest and the release of a grand jury presentment), these accusations against me are not only untrue, but the exact opposite of the truth.

As for the specifics, one serious allegation is that I stalked certain victims. Let me be clear, I have NEVER remotely “stalked” anyone in this case. This is simply a loaded term used to create a false impression and provoke faux outrage. In fact, I have only ever sought to contact THREE of the thirty-three adult men (who were paid almost $100 million by Penn State in this case) and in all three of those situations my actions have been on extremely firm moral and legal ground.

The three men who I have sought to speak with about their stories are Aaron Fisher (“Victim 1” who, in his own name, wrote the only accuser’s book in the case), Sandusky’s adopted son Matt Sandusky, and a man Penn State paid as “Victim 2,” the boy who Mike McQueary infamously saw with Sandusky in a Penn State shower in 2001. It is important to point out that ALL of the accusers in this case are adults who have proactively put their names very clearly in the open public record, but these three provide extremely special circumstances regarding the public nature of their role.

Fisher, by far the most important accuser in the whole case who wrote the book and appeared on 20/20, is obviously a public figure in every way. But more than that, he ASKED me, through an article in the Philadelphia Inquirer, to meet him. Before he did that, I had never even attempted to contact him, despite the fact that his mother once accepted, via Facebook, my offer of $10,000 to charity if Aaron could pass a lie detector test (which she then backed away from the next day, apparently after speaking to Aaron).

Aaron not only publicly said he wanted to meet (not to mention engaging me in a long, taunting Facebook exchange), his fiancé posted this photo of him giving the middle finger to the camera while partly naked in a bed draped with cash to Facebook: 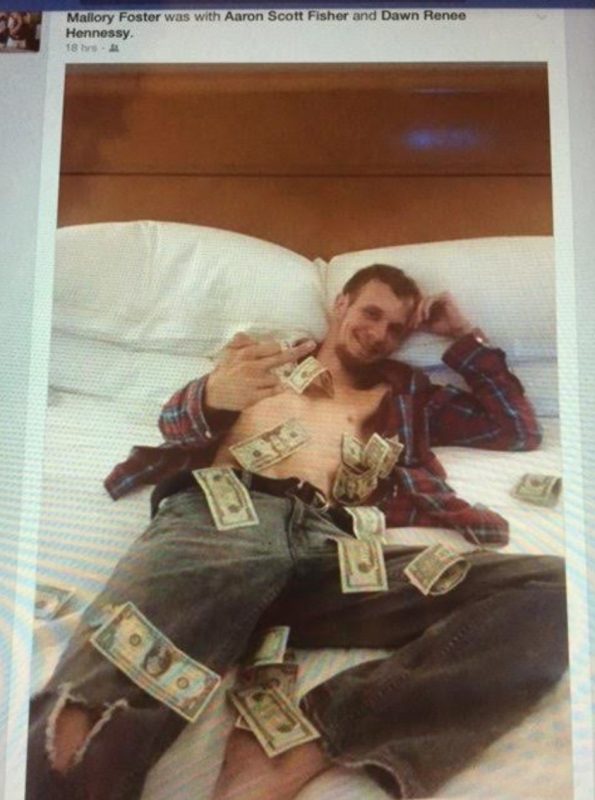 This photo appeared to be directed at me after I had reported on my website that many of his good friends, former girlfriends, supporters, and even close family members had gone on the record interviews with me saying that they are quite certain he was never abused by Sandusky. (A total of 12 people have spoken to me regarding this allegation.)

At this point, I felt more than within my rights to try to speak with Aaron in person. So I went across the country to his house in Pennsylvania and attempted to do so. I did that on ONE occasion and he was not home. I also called his cell phone (twice, I believe) to let him know I was in town. This is NOT “stalking.” This is called “journalism.”

As for Matt Sandusky, having starred in a documentary film and done a very revealing interview with Oprah Winfrey about the case (where he melted down when asked how we know he’s telling the truth), he is also very much an adult public figure. It is also very important to point out that the ONLY time he ever testified in this case was when he strongly DEFENDED Jerry Sandusky to the grand jury.

So, in a rational world, Matt clearly has no magical media “force field” as a “Sandusky Victim,” as the court never determined that he was one. Penn State also paid him a large, un-vetted, settlement (despite the fact that he was too old under the state’s statute of limitations law).

So, last year when Matt held his first speaking engagement in Pennsylvania, I flew across the country to attend with the hope of asking him a few questions (I had previously publicly offered to donate money to charity in exchange for an on-camera interview, but he never responded). I had a ticket to this very public event, on public property, in my own name, but it was VERY obvious that I was targeted by the authorities, at Matt’s direction, from the moment I arrived at the event (one which, very oddly, Matt had already banned any recording of).

Outrageously and inexplicably, after Matt refused to start speaking while I was still sitting in the audience minding my own business, the police ordered me to leave the premises. When I asked why, they pulled me out of my seat, dragged me across the floor, slammed me to the ground and handcuffed me. I was arrested and hit with a series of completely absurd charges. Thankfully, because it was all caught on tape and it was very clear I had done nothing wrong, all the charges were eventually dropped and I paid a $100 fine so I could avoid the expense of yet another trip across the country.

Had I been a celebrity, or the media not been so incredibly biased on this story, my plight would have been considered a serious violation of freedom of speech and of the press. It is the most egregious abuse of my rights that I have ever experienced. I know that I did not do anything wrong/illegal and the fact Matt was so incredibly worried about having me simply watch him speak should say volumes about what is really going on here.

The only other accuser of Jerry Sandusky I have ever sought to speak with is the man who Penn State paid millions of dollars as “Victim 2,” the boy in the “Mike McQueary Episode” at the heart of the entire case.

It is important to know that this man (who claimed he was a “victim” after he gave this bombshell statement exonerating Sandusky in the McQueary situation, causing both sides to fear his testimony) never testified at Sandusky’s trial. He also, as a married Marine, wrote letters to the editor in his own name strongly supporting Sandusky in local papers after the story broke, which to me eliminated any claim to anonymity that he might have.

Amazingly, prosecutors told the jury that they could not produce a victim in the most widely reported allegation of child sex abuse in history because the boy’s identity was “known only to God.”

Therefore, no court has ever officially deemed this man to be a “victim” in this case. Like Matt Sandusky, he was paid money by Penn State in an agreement where the school specifically states that it has not verified the nature of the claims. In an effort to find out what really happened, I e-mailed him on several occasions, even making a video plea just for him, which I later posted to YouTube. I have also left him a couple of voicemails, but was never sure I had the correct phone number.

I always made it clear that if he simply responded that I had his real story wrong that I would, of course, leave him alone (and I would have been THRILLED to be able to get this entire monkey of a story off of my back forever). That never happened, and so I then made one visit to his home where I immediately left after being asked to by his wife. Again, that is not stalking: It’s trying to find out the truth.

So I have never remotely “stalked” anyone, nor have I never “outed” anyone whose name was not already made very public by their choice. I have also never come close to revealing anyone’s contact information — that allegation is simply bizarre. Like almost everything else in this insane tale, there is what some in the media tells you about what happened, and then there is the truth.

I just told you the truth. Just in case that still matters.