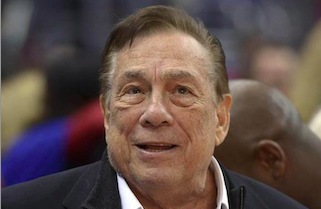 In a new audio recording obtained by Radar Online, L.A. Clippers owner Donald Sterling can be heard lamenting his current situation following the previous release of racist comments he made during a taped discussion with girlfriend V. Stiviano. “You know I’m not a racist!” Sterling says in a phone conversation with an alleged “friend.”

“You think I’m a racist?” Sterling asks his friend in the audio recording. “You think I have anything in the world but love for everybody? You don’t think that! You know I’m not a racist!”

In the next breath, he explains that he grew up in East L.A., somewhere most people would “die” to get out of. While he’s a Jew, he said 50% of the people there were black and 40% were Hispanic, “so I mean, people must have a good feeling for me.”

“I mean, how could you think I’m a racist knowing me all these years?” he asks. “How can you be in this business and be a racist? Do you think I tell the coach to get white players? Or to get the best player he can get?”

Sterling also addresses his relationship with Magic Johnson, about whom he made disparaging remarks in the original audio that led to his lifetime ban from the NBA. “It breaks my heart that Magic Johnson, a guy that I respect so much, wouldn’t stand up and say, ‘Well let’s get the facts. Let’s get him and talk to him.’ Nobody tried. Nobody!” he says.

As for the possibility that the league could force him to sell the Clippers, Sterling remained defiant. “You can’t force someone to sell property in America,” he argues. “I’m a lawyer, that’s my opinion.”

Listen to audio below, via Radar Online: