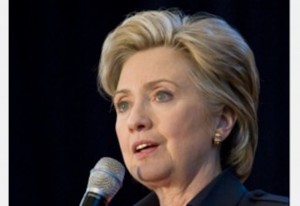 A new report out tonight reveals that newly released State Department emails show there was a time when Hillary Clinton‘s tech issues caused problems for the State Department.

And yes, it concerns her private email server.

According to the AP, there was an issue with Clinton’s server where emails sent from that server to State Department employees weren’t being delivered properly, and so State had to fiddle around with some tech issues on its end.

And by “fiddle around with some tech issues,” I mean “they temporary disabled government server security features.” No, seriously:

The emails, reviewed by The Associated Press, show that State Department technical staff disabled software on their systems intended to block phishing emails that could deliver dangerous viruses. They were trying urgently to resolve delivery problems with emails sent from Clinton’s private server.

“This should trump all other activities,” a senior technical official, Ken LaVolpe, told IT employees in a Dec. 17, 2010, email.

Another State Department official said, after this was taken care of, “We view this as a Band-Aid and fear it’s not 100 percent fully effective.”

And then there was a time when Clinton’s server was shut down because… well, guess why:

Days after the technical crisis, on Jan. 9, 2011, a State Department IT staffer was forced to shut down Clinton’s server because he believed “someone was trying to hack us.” Later that day, he wrote, “We were attacked again so I shut (the server) down for a few min.”