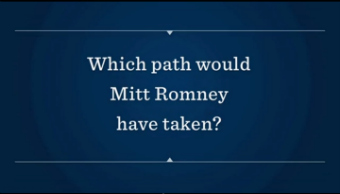 In a web ad released today by President Obama‘s campaign, Bill Clinton praises Obama’s handling of the raid that killed Osama bin Laden last year, and suggests that presumptive GOP nominee Mitt Romney would not have ordered the raid.

Clinton describes the biggest difficulty Obama faced in making the decision (something Clinton should be intimately familiar with): the potentially horrible political fallout from a botched raid. But Clinton commended Obama’s resolve in ordering the raid anyway:

The ad then asks: “Which path would Romney have taken?”

The Obama campaign suggests Romney would not have ordered the strike.  The video makes the case that this is not a simply conjecture, citing a 2007 Reuters article in which Romney openly criticized then-candidate Obama’s vow to strike al Qaeda targets in Pakistan.

It’s now sad to see the Obama campaign seek to use an event that unified our country to once again divide us, in order to try to distract voters’ attention from the failures of his administration.

View the Obama campaign’s “One Chance” ad below: