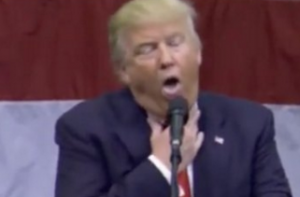 When a Staten Island grand jury failed to indict the officer who killed Eric Garner with a chokehold over Garner’s suspected sale of untaxed cigarettes, it hit New York City like a historical ton of bricks. There were protests and round-the-clock news coverage. Every night for weeks, the street were filled with protesters. The effects of Garner’s death and the lack of indictment were far-reaching and long-lasting.

“The last election should have been won, except Romney choked like a dog. He choked,” said Trump, according to The Staten Island Advance. Then, he put his hands to his throat in the universal choking sign and quoted Garner.

Trump mocks Eric Garner in criticism of Mitt Romney-IF U DON’T LIKE HIS ACTIONS NOW,IF ELECTED,WILL BE TOTAL FIASCO https://t.co/ztA5v26abZ

People don’t seem excited about it, although The Advance reported that there was laughter at the event in Rome when he made fun of Romney.

Donald Trump is a Dumbass for saying Those words by Eric Garner, “I Can’t Breathe” & It is not funny. #Sanders2016 #Clinton2016

Trump using Garner’s words “I can’t breathe” as a joke to verbally attack a politician makes me sick to my stomach. #EricGarner

Trump, in Rome, NY, mocking Romney, pretended to choke himself and said, “I can’t breathe.” Get it? Ugh.

The primaries in New York at set for next Tuesday. Trump will be addressing the Staten Island Republican County Committee’s at the annual Lincoln Day brunch Sunday.