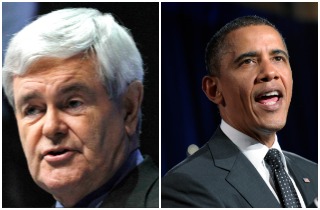 President Obama is the “most successful salesman for people having the right to bear arms in modern history.” Or so says Newt Gingrich in an interview with Newsmax, in which he criticized the president’s approach to gun control — noting that a “huge number” of Democrats, not just Republicans, also view the Second Amendment as a big issue.

“No one has done more for gun ownership than Barack Obama,” the former GOP presidential candidate contended. “If you look at the number of people who have bought guns since he became president, he has been the most successful salesman for people having the right to bear arms in modern history.”

The gun control battle has obviously been a tough one, and recently Sen. Rand Paul (R-KY), among others, have vowed to filibuster any gun legislation put forward. Republicans, however, aren’t the only ones concerned, Gingrich pointed out:

“There’s a huge number of people in every Democratic Senate race in 2014 who care about the right to bear arms,” Gingrich told Newsmax. “What they’ve done in part was set up the fight where they’re asking Democrats from states where the right to bear arms is a big issue to go on the record for cutting off the filibuster, which would be a very unpopular thing for them to do.”

Senate Democrats simply won’t be able to push through a comprehensive measure on the the issue, Gingrich added, predicting, “They may get one or two small things that they can claim as a public relations victory, but the continuous desire of liberals to disarm the American people will be frustrated once again.”

The road to 60 votes in the Senate, despite a Democratic majority, has been long with 21 Democratic senators — up for re-election and many from red states — unwilling to support the proposals. If they can’t break the filibuster, Gingrich said they have the president to thank.