Newtown Dad Reaches Out to UCSB Dad: ‘You Are Not Alone’ 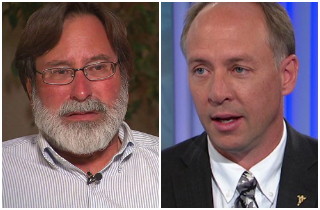 In the days after his son was killed by 22-year-old Elliot Rodger near UC Santa Barbara, Richard Martinez has been a singular voice speaking out in favor of gun control and demanding action from Congress. On Tuesday, one of the few people who know what he’s going through reached out with a heartfelt open letter.

Mark Barden, who lost his seven-year-old son Daniel in 2012 during another mass shooting at Sandy Hook Elementary School in Newtown, Connecticut, posted the message to Martinez on the Facebook page for Sandy Hook Promise, a non-profit that supports the victims of that tragedy.

We have not met, but you are now part of our extended family. It is not a family we chose, but a family born from the horrible circumstance of losing a child to gun violence—one that’s only growing each day. My heart breaks for you because I know just a little about the long road ahead of you. We have reached out to you privately but publicly we wanted to say to you and those feeling the sorrow, anger and frustration of this weeks’ shooting, you are not alone. It has helped me, and some of the other family members who lost children and family at Sandy Hook Elementary, to come together and advocate for common sense solutions to expanding programs for mental wellness and gun safety solutions. You will find your own path down this difficult road. But know that we are here for you and all of you who have been touched by this tragedy. Together we can and will build a safer world for all our children.