A debate is raging on social media whether or not pro-Donald Trump CNN contributor Jeffrey Lord used Mexican women’s menstruation as an anti-NAFTA talking point Monday night. Yes, this is a thing that’s really happening. 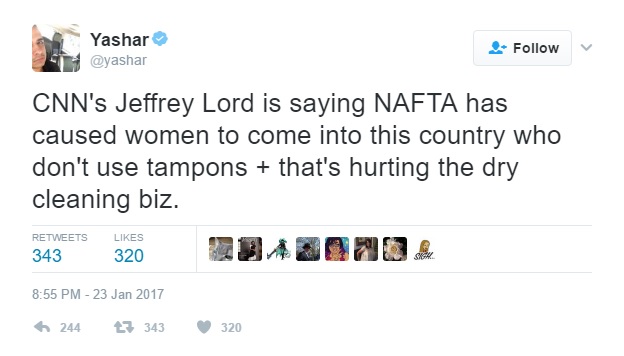 At first glance, Ali appears to be right. Here’s what Lord said:

Here is a guy who is being asked to clean ladies’ garments, and they bleed, which costs him money because he has to pay for the garment. The reason they bleed is because they don’t come into the country with the same standards, because of NAFTA. That is part of the problem here.

In other words, what we have is a disconnect between people who are operating in theory in Washington, and people who are on the ground living with the results. They are very unpopular, and the dry-cleaner voted for Trump.

For a while that was standard interpretation, and was mocked thoroughly by right and left alike.

Bold move Cotton, let’s see if it pays off https://t.co/DcfqiG8i7g

I’m sorry, WHAT? Did Jeffrey Lord just say Nafta causes immigrant women to menstruate all over people’s dry cleaning? WHAT IS HAPPENING? https://t.co/RIW6HLkmws

Don’t try to figure out Trump surrogates; just go with the flow. https://t.co/awvzJjE2hH

Just when I thought the ignorance couldn’t be greater along comes Jeffrey Lord. https://t.co/KKvaQ2CJ6B

I wish I was still bleeding so I could bleed all over @realJeffreyLord. Also your opinion on what women’s body’s do doesnt fucking matter. https://t.co/ImOeeQ8vJG

But others started to argue Lord’s comment was being misinterpreted. He could’ve been arguing that it was the garments that bleed, not the women themselves. His point was more about the quality of products coming from Mexico than their women’s menstrual habits.

Ali made a good counterpoint, while still deleting his initial tweet and admitting it was up to debate: if Lord was only talking about dyes running, why did he specify “women’s” garments?

Here’s video thanks to @AndrewKirell – is he talking about women’s menstruation/fabric? If it was fabric why did he say “women’s garments” pic.twitter.com/kQPvh9HIqr

Personally, I’m going with Occam’s Razor here. What’s more likely, Lord made an awkwardly phrased criticism of Mexican products during a segment on NAFTA (which has more to with free trade than immigration)? Or that he complained that NAFTA let in Mexican women who bleed all over their clothing and make life hard for dry-cleaners, stony-faced on CNN on primetime, as Anderson Cooper and a liberal guest just let it slide. I don’t see the need to buy into the sensational interpretation when the bumbling one seems more likely, even given Lord’s history of interesting rhetoric.

As for the “women’s” thing… I’m at a loss. My best guess is it was Freudian: Lord was taking about laundry and clothing, which stereotypically are seen as “female” concerns. But for all we know, that dry-cleaner did have more problems with women’s garments than men’s. I’d expect men are less likely to wear bright, bold colors, for example.

But as fun as would be to run with the Jeffrey Lord-period story, this ends more a lesson in how different people can hear the same thing and come to radically different conclusions based on their preconceptions, and why collaboration and seeking second opinions enriches journalism.

And yes, it does say quite a bit when that when was reported Lord made a loony, offensive, horribly racist comment, most reporters’ first reaction was to find it eminently believable.

Yes, @HashtagGriswold has it exactly right. "Bleeding" refers to clothing where colors "bleed". Nothing else.