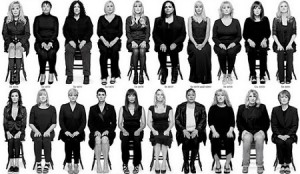 The latest cover of New York Magazine is a powerful, in-your-face reminder of the literal toll of the rape allegations levied against comedian Bill Cosby. That’s because it features 35 of the once-beloved actor’s accusers, each sitting in a chair, in a large, colorless picture against a white background. To bad you can’t really see it anymore.

That’s because, according to The Daily Dot, a hacker by the name of ThreatKing has supposedly taken down the website with a distributed denial of service attack. The attack occurred a few hours after the new cover story went viral on Sunday night.

Our site is experiencing technical difficulties. We are aware of the issue, and working on a fix.

Yet ThreatKing didn’t hack NYMag‘s website because of the Cosby cover story. At least, that’s what he said in a Skype interview:

ThreatKing said his hatred of New York City is based on a visit to the city gone wrong. “I went to new York 2 months ago. It was really bad,” ThreatKing said. “Someone pranked me. Everyone started laughing and shit. The first 10 hours being there. Some African-American tried to prank me with a fake hand gun.”

That’s why, he said, he “[wants] to see people die at [sic] New York.” “I’ve seen many pranks gone wrong at new york. That got me pissed. That’s why I chose New York.”

“I’ll try my best to keep [New York] offline for 14 hours,” ThreatKing said, adding, strangely, that “we would control the Internet if we had enough money. Because each server costs money.”

The hacker initially took credit for the attack on Twitter, using the handle @Vikingdom2016. The NYMag staff is well aware of the hack, which is still ongoing as of this writing. In the meantime, the magazine’s Twitter and Instagram accounts have offered readers alternative, still-operational ways to learn about a few of the Cosby accusers’ stories:

Our site is still down but you can listen to 2 women’s testimony about Cosby on Instagram https://t.co/GEoDc8pMF0 + https://t.co/CLlPl40cGS