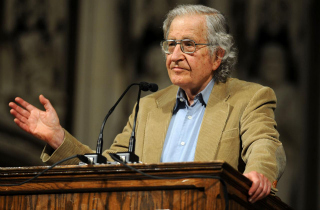 In an interview with AlterNet this past week, America’s most well-known left-wing intellectual slammed President Obama for his inexplicable “attacks” on civil liberties in the forms of various laws expanding upon the executive powers set forth by President George W. Bush.

Speaking with the liberal blog’s Mike Stivers, Chomsky expressed dissatisfaction with the current president’s record on civil liberties: “I personally never expected anything of Obama, and wrote about it before the 2008 primaries. I thought it was smoke and mirrors. The one thing that did surprise me is his attack on civil liberties. They go well beyond anything I would have anticipated, and they don’t seem easy to explain.”

For an example of Obama’s civil liberties abuses, Chomsky cited Holder vs. Humanitarian Law Project, in which the administration petitioned the Supreme Court to put an end to legal groups giving any “material assistance” — including advice to turn nonviolent — to terrorist organizations.

“The case in question was a law group that was giving legal advice to groups on the terrorist list, which in itself has no moral or legal justification; it’s an abomination,” Chomsky said. “But if you look at the way it’s been used, it becomes even more abhorrent … And the wording of the colloquy is broad enough that it could very well mean that if, say, you meet with someone in a terrorist group and advise them to turn to nonviolent means, then that’s material assistance to terrorism…. Obama wants to criminalize that, which is a plain attack on freedom of speech. I just don’t understand why he’s doing it.”

He called that and the 2011 NDAA bill’s “indefinite detention” provision part of the president’s “very serious attack on civil liberties.”

On the fact that President Obama has prosecuted six whistleblowers under the Espionage Act, Chomsky lamented that “I don’t know what base he’s appealing to. If he thinks he’s appealing to the nationalist base, well, they’re not going to vote for him anyway. That’s why I don’t understand it. I don’t think he’s doing anything besides alienating his own natural base.”

He then likened the president to a previous gang of executive officials who were widely criticized as abusive on civil liberties policy:

“What it is is the same kind of commitment to expanding executive power that Cheney and Rumsfeld had. He kind of puts it in mellifluous terms and there’s a little difference in his tone. It’s not as crude and brutal as they were, but it’s pretty hard to see much of a difference.”