NPR Will Stop Referring To Obama As ‘Mr.’ On Second Reference To Avoid Appearance Of ‘Favoritism’ 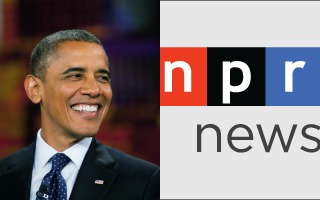 One week after MSNBC’s hosts of The Cycle pondered if it was disrespectful for news organizations to refer to President Barack Obama as simply “Obama” after the first reference, National Public Radio’s managing editor has determined that the organization will jettison their policy of calling presidents “Mr.” on the second reference in order to avoid the appearance of “favoritism.” NPR announced Friday that they intend to refer to him as simply “Obama” on the second reference, as many other media outlets’ style guidelines recommend.

RELATED: MSNBC Hosts In ‘Really Deep’ Segment On Need To Call Him ‘President Barack Obama’ In Every Single Reference

“Beginning with the inauguration of President Barack Obama for his second term next Monday, “Mr.” Obama and his successors will be called by just their last names on second reference. “Obama,” for example. Just like the rest of us,” wrote NPR’s ombudsman Edward Schumacher-Matos.

Stuart Seidel, NPR’s managing editor, noted that the honorific prefix “mister” is antiquated and overly deferential to the President of the United States.

“Although meant as a gesture of respect for the office, many listeners have regarded the use of “Mister” as disrespectful,” Seidel wrote. “On the other hand, during the most recent presidential contest, the contrast between our references to “Mister Obama” and just plain “Romney” were perceived by many as showing favoritism toward the incumbent president.”

“After considerable discussion — and some thoughtful deliberation — we will take the start of the second Obama term as a good opportunity to eliminate this style anomaly.

“Many listeners have complained over the years about the style. It was meant to show extra respect, but as I wrote in a column on Election Day, extra respect is a suspect practice in a democracy like ours,” Schumacher-Matos wrote. “[A] smaller number of listeners have steadily made the opposite complaint: “Mr.” is too informal and that the president should always be called “President so-and-so” in second references. The complaints seemed to come from supporters of the person in the White House at the time. They often saw an NPR conspiracy afoot against their guy.”

Like MSNBC, it appears NPR was inundated with complaints from its listeners who saw a lack of respect shown to either the president’s opponents when they were not referred to as “mister” or a submissive attitude towards Obama who was always called “mister.”

These news organizations have devoted a significant amount of thought to the hairsplitting gripes offered by the hyper-partisan fringes of their audience. The vast majority of MSNBC viewers and NPR listeners, I believe, saw no evidence of conspiracy in how they referred to the president on the second reference. Evidence of bias accumulates over the course of years and in the substance, not the style, of the work that these organizations do.

Both NPR and MSNBC could have sufficiently addressed this “controversy” with one dismissive word: “relax.”

Read the full announcement via NPR