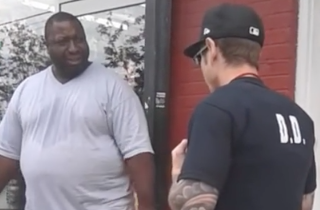 Yesterday, the city of New York reached a $5.9 million settlement with the family of Eric Garner, the New York man who died after being put in a chokehold by a police officer. Garner’s family, along with Al Sharpton, said today that it’s not enough and that money is not justice.

Well, the head of the Sergeants Benevolent Association, a New York police union, also expressed his dissatisfaction with the settlement in a New York Post interview yesterday, but for entirely different reasons.

Ed Mullins called it both “obscene” and “shameful” because “the city has chosen to abandon its fiscal responsibility to all of its citizens and genuflect to the select few who curry favor with the city government.”

He doesn’t believe the Garner family “should be rewarded simply because he repeatedly chose to break the law and resist arrest,” and even called this an injustice for the taxpayers of New York City.

Mullins believed that a jury would have given the family less because they would have been judging the case on “neither politics nor emotion.”

He also gave a separate interview in which he gave this rationale for why Garner’s family did not deserve that much money:

A victim’s income and contributions to society usually are routine factors used to calculate settlement amounts, but the payout in the Garner case far exceeded that for victims with similar situations to Garner, Mullins said.

Garner had “no earning power,” “no contributions to society” and was “a criminal with a history of 30 prior arrests,” he said.