Obama Campaign: AttackWatch Gains Over 100,000 Sign-Ups In Less Than 24 Hours 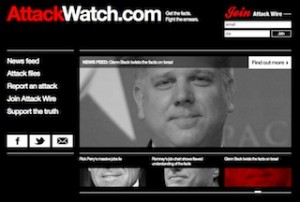 This week the Obama campaign launched a new front in the heightened information wars that come with presidential campaigns, with a starkly designed and somewhat controversial new website called Attack Watch. The site enables user-generated submissions of what Obama supporters deem to be unfair or untruthful media attacks on President Obama, his political campaign and his administration’s policy. Almost immediately after launching, right-of-center Internet outlets derided the effort, and a Washington Post article called it a “laughing stock.”

But the starkly and intimidatingly designed site has so far been a big hit. A source within the Obama campaign has told Mediaite, that in just the first day, the user-generated research tool has been nothing short of an enormous success. “In less than 24 hours we’ve had over 100,000 people sign up at the website, which indicates significant interest from supporters.” When asked about the design of the website, the source said “its a website with significant resources and its a good resource tool for supporters.”

While the volume of conservative critiques speaks to the intensity of the opposition’s feelings towards the Obama administration, at the very least this digital effort did it’s job bit perhaps instilling a little fear in the GOP campaign efforts. It’s not difficult to imagine social media staffers at the RNC scratching their heads and saying “why didn’t we think of that?”

The essence of AttackWatch is the Obama campaign outsourcing of opposition media research to its army of loyal supporters. Among the critiques leveled at this interactive effort is the notion that this is some vestige of “Big Brother” keeping an eye on citizens opposed to the White House politics. This would be a fairer analysis if it were made before the advent of social media platforms like Twitter, Facebook and YouTube. In the brave new world that is oppo research and political smear campaigns, leveraging the passion of one’s political base is not something that we should fear, but rather a smart and savvy political move.