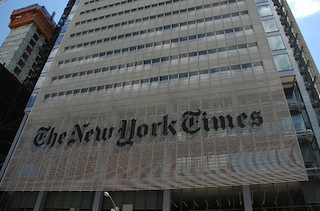 According to a story by New York Observer’s Ken Kurson, staffers at the New York Times have had it with the opinion and editorial section, and especially with editorial editor Andrew Rosenthal, whom they describe as petty and tyrannical.

Kurson spoke to 24 current and former Times staffers (of a staff of 1200, mind). He found dissatisfaction with the amount of effort put into editorials compared to their lackluster influence, and an unhappiness with the quality of opinion columnists, with multiple sources citing cabbie-whisperer Tom Friedman as a blaring example:

“I just think it’s bad, and nobody is acknowledging that they suck, but everybody in the newsroom knows it, and we really are embarrassed by what goes on with Friedman. I mean anybody who knows anything about most of what he’s writing about understands that he’s, like, literally mailing it in from wherever he is on the globe. He’s a travel reporter. A joke. The guy gets $75,000 for speeches and probably charges the paper for his first-class airfare.”

Kurson quoted multiple staffers who criticized Rosenthal’s bullying managerial style, which they say often focuses on trivialities, made all the worse by the fact that Rosenthal reports to publisher Arthur Ochs Sulzberger Jr., rather than Executive Editor Jill Abramson. “There is suddenly evidence that the festering dissatisfaction with the edit page has broken into what one reporter dubbed ‘semi-open revolt,'” Kurson wrote. “One reporter says that he literally will not allow Mr. Rosenthal to join their lunch table in the cafeteria.”

The Times shot back in several emails on Wednesday. Abramson wrote to Capital New York:

“Andy Rosenthal is my cherished colleague and the editorial page he runs (independently of the newsroom as has been true at The New York Times forever) serves as the good conscience of our readers, always topical and urgent and compelling, more so under Andy’s leadership than any editor I can name. Reporters here cherish Andy’s good humor and his bonhomie. As someone who has also been falsely portrayed recently, I can say as a voice of experience that this article bears no relationship to reality.”