Occupy Wall Street Gets Itself A Job Fair 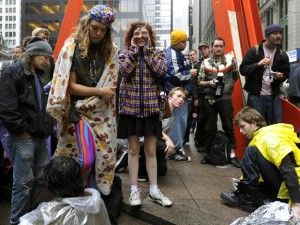 Back in November, on the two-month anniversary of Occupy Wall Street’s origin, Derek and John Tabacco — two Wall Street-area small business owners — headed down to the protests holding signs that said “Occupy A Desk” and “Get a Job.” Dubbing themselves the “Wall Street Freedom Fighters,” the brothers were the first real signs of an anti-OWS protest, but stressed at the time that they weren’t against the principles of what OWS stood for, they simply wanted the protesters out of Zuccotti Park because they were hurting their businesses and area tourism.

Now the duo has decided to do something more than just hold a sign.

On Dec. 12, the brothers will hold a job fair at Zuccotti Park. From noon until 4 p.m., job-seekers can head down to the park for the “Occupy A Desk American Job Fest.” The brothers have already confirmed 12 companies (including Intermedia Group, Network Placements, and Ambit Energy) with over 40 job openings. “During our last counter protest, we heard repeatedly from Occupy Wall Street that they couldn’t find a job,” Derek Tabacco says, in explaining the impetus behind the job fair. “We thought with the holiday season upon us, what better gift to give someone than a much-needed job.”

The brothers say that there will be proper tables set up, and candidates will be able to give resumes to Human Resource representatives, as well as take part in pre-interviews. Derek Tabacco tells Mediaite that if businesses would like to get involved in the job fair, they can contact him or his brother, either through the movement’s website or via Twitter. And he promises, to both the potential job-seekers and employers, that this is a sincere event. “Our dad was an NYPD officer, our mom was a housewife highly focused on community and charity,” he explains. “We weren’t brought up to be antagonistic. We want to bring a positive message to the park. We welcome anyone to come by and check out the fair.”

Below, enjoy the Mediaite interview with the Tabacco brothers from November, on the first day of their anti-protest: