Odd Romney Gaffe: Americans The Only People Who Put Hands Over Hearts During Anthem
video

Odd Romney Gaffe: Americans The Only People Who Put Hands Over Hearts During Anthem 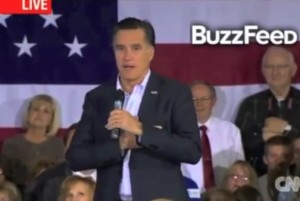 There are actually a couple of odd things about the Mitt Romney gaffe that recently surfaced on the newly-Ben Smith-run Buzzfeed. In the brief clip, former Massachusetts Governor Mitt Romney claims that “we (Americans) are the only people on Earth that put our hand over our heart during the playing of the National Anthem.”

The claim itself is weird (and false) on its face, and reminded me of nothing so much as the running gag in the film Shaun of the Dead, in which Simon Pegg’s character questions the claim that “dogs can’t look up.”

It’s a relatively innocuous claim (it’s not as if he said “We’re the only people on Earth who don’t eat live kittens), but it’s possible to interpret this fantasy of his as an extension of a facile “exceptionalist” worldview. It’s not enough that America be the best country on Earth, her people have to be the only ones who love their own country enough to show her reverence.

What’s equally weird is that Romney’s been making this claim for months.

Buzzfeed‘s Andrew Kaczynski picked up on the quote during Romney’s speech in Reno, Nevada Thursday night, and follows the clip with a photo array of the other people of Earth who show heart-covering reverence for their own countries, noting that Romney “ran the Olympics, he should know better”:

Romney has milked the subject of patriotic songs for cheap crowd approval (not always successfully) for quite some time now, which certainly isn’t a crime, but he made the hand over heart claim at least as far back as December, at a stump speech in Iowa:

Unfortunately, no one seems to have noticed it until now. That means there are at least a few hundred Iowans who now think that only Americans put their hands over their hearts when they hear their National Anthem. Romney should correct himself, and while he’s at it, let America know that dogs can, indeed, look up.